The biggest update in 2008 was that year’s Christmas Party beginning. This was Club Penguin fourth Christmas Party, as they’ve had one every year since 2005. Comparing parties on Club Penguin to now, they were rather minimal – just some simple decorations in rooms around the island and a few free items – no interaction or tasks. That has definitely changed overtime though. The two free items at this party were returning from past years. The Santa Beard was in a box at the Ski Village and the Santa Hat was in a box at the Snow Forts. One new addition to the Christmas Party in 2008 was three special books in the Coffee Shop: A Penguin Christmas Carol, Puffle Pal Adventures: Music Makes Magic, and Christmas on Rockhopper Island. 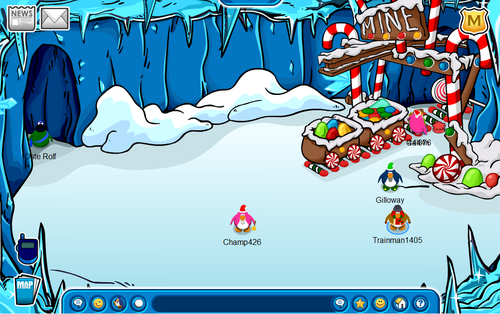 The Ice Rink also returned for winter, replacing the Soccer Pitch like it usually does every six months or so. The Present Pin was also hidden, located to the right of the fireplace at the Ski Lodge. The Present Pin is Club Penguin’s 79th pin overall and is the fourth pin to be hidden at the Ski Lodge. The final update in 2008 was the igloo decorating contest starting. There were ten grand prize winners who received 25,000 coins each. There was also ten runner-ups who received 10,000 coins each. 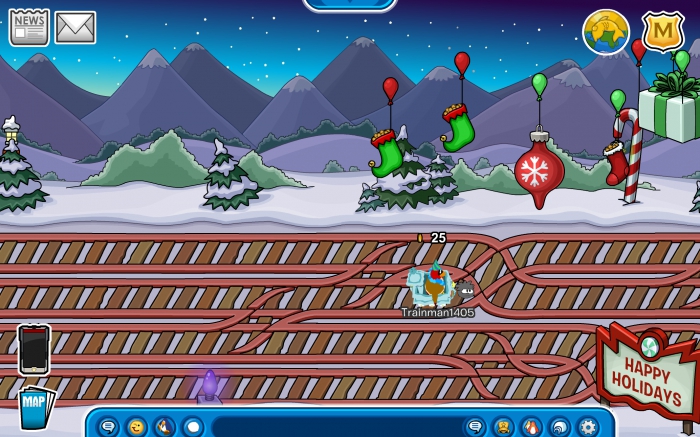 Club Penguin also added a new login screen and logoff screen advertising trains saying there are special gifts for everyone, as there was a new gift each day at the party. Some of the gifts were furniture items, some were clothing items, and on the final day there was the Sweet Swirl Igloo for all players. You could also get the CFC 2013 pin by donating to Coins For Change anywhere on the island. There was also a special party catalogue filled with items for members. They could buy a Robot Costume, Engineer Costume, and more. Rockhopper’s catalogue for his visit contained the Jolly Roger Hat for all players plus four clothing items that members could buy. Rockhopper also had a new giveaway background for the holidays.

The 19th of December in 2013 is also when Club Penguin added quests for brand new players, allowing them to unlock the Polka Puffle Hat, Insta-Hero Shirt, and Table for Two furniture item. I still feel that it’s unfair that old new players do not get these items. Back when I joined Club Penguin we only got a few coins! I believe it was 100…then they raised it to 500….then 500 and a background and hat…and now the three items mentioned above. The three items are unlocked by completing quests for finding the clothes shop, finding the pet shop, and finding your igloo.

The final update in 2013 was ClubHerbert.com being updated with an image of Klutzy the Crab looking at a map of the wilderness going “>:P”.

In 2014 there was one update at the Merry Walrus Party. A new holiday tradition was now available. All players could go to the Beach and throw food ten times at the Festive Fluffy Feast Food Fight. Once completed 500 coins were donated to Coins For Change.