In 2005 there were two updates. There was a new furniture catalogue for the month which contained few new items. There was also a brand new game, Puffle Roundup. Because furry creatures (puffles) were spotted on Club Penguin they had to be rounded up so they could be sold at the Pet Shop! Back in 2005 when Puffle Roundup made its debut it was located at the Snow Forts because the Pet Shop still had to be built.

As for 2006, just like 2005 there was a new furniture catalogue released for the month. It featured holiday themed items such as the Christmas Tree, Christmas Lights, and Christmas Wreath. There was also a new igloo catalogue featuring the Snow Globe Igloo, costing players 3,700 coins. Back then igloos didn’t have backgrounds, as shown in the image below! This image was posted on the Club Penguin Blog by Billybob. 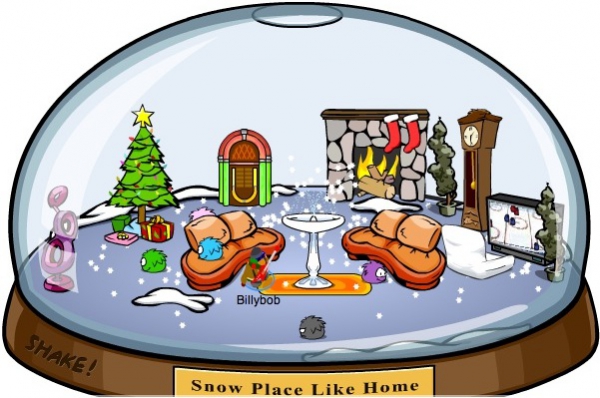 The final update on this day in 2006 was Thin Ice being released. This is Club Penguin’s second arcade game and you can find it at the Dance Lounge. Aside from adding stamps and making the levels past level 10 only for members, the game has remained unchanged. Some Club Penguin websites say the game was released the 19th of December while others say 15th of December. Honestly I’m not 100% sure, but oh well, close enough!

In 2008 there was only one update. That year’s Christmas Party was going to start in a few days so creates filled with decorations were added to the Town, Ski Village, and Cove.

In 2010 there was also only one update. The 27th field op mission was released. You this mission you had to go to the Ski Village behind the Tour Guide booth. The mini-game was to break the code by scanning symbols to find the correct combination.

At the Holiday Party there was an Advent Calendar with one item per day you could collect. The items were clothing, pins, and backgrounds. Members could also go on Santa’s Sleigh, which was located at the Dance Lounge, and collect  a few items. Members also had the ability to get the Cookie Serving Apron and Deluxe Gingerbread House Igloo from the special Bakery room. In the Book Room all players could get the Santa Seat Background.

As for Coins For Change, that year players could donate coins in 100, 500, 1,000, 5,000, or 10,000 intervals to build safe places, protecting the earth, and providing medical help. Anyone who donated would get the Coins For Change 2011 Pin. Those who donated 10,000 coins would unlock the Epic Volunteer stamp for their penguin, which was brand new. However many coins was donated to each category determined how Club Penguin could break up the $1,000,000 they were donating to the three charities. 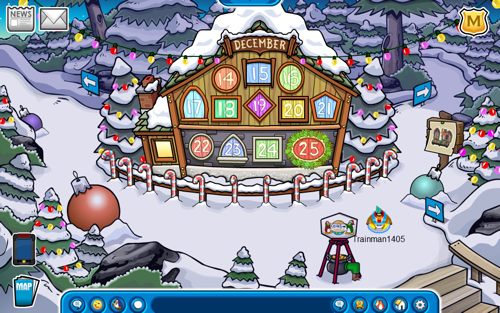 The furniture and igloo catalogues were also updated for the month on this day in 2011. The Snow Globe Igloo (3,700 coins) and Log Cabin Igloo (4,100 coins) were brought back. The furniture catalogue contained a selection of holiday themed items, some new and some old. Some of the new items were the Gumdrop Tree, Gingerbread Man, and Jujubes. 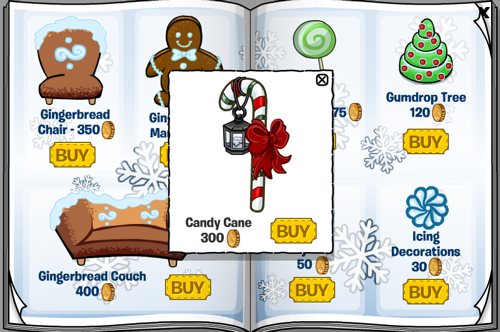 All those updates and we’re still not done with 2011! A brand new stage play, A Humbug Holiday, was released. This play is a paraody of A Christmas Carol by Charles Dickens and was at the stage a total of four times before its closure in June 2015.

The 60th field op was released on this day too. For this mission you had to go to the Ice Rink/Stadium. The mini-game to complete the field op was to crack the lock, which was done by listening to the tempo of the lock and then repeating it – a challenging task!

There was also a new pin, the Reindeer Pin. The Reindeer Pin is Club Penguin’s 187th pin overall and is the ninth pin to be hidden in the Pizza Parlour.

Minor updates on this day in 2011 include the postcard catalogue being updated with new Holiday Postcards (Let It Snow, Season’s Greetings, Thanks for my gift!, Happy Holidays, Give a Gift!, and Coins for Change), the Coins For Change and Holiday Party login screens for that year being updated a little bit, and Herbert wearing a Santa Hat in the EPF Command Room on the Herbert Cam feed.