Thin Ice was released in Club Penguin in December 2006, right around the time of the Christmas Party. In Summer 2010 this game was updated with stamps you could earn. Below is a video of the game in play.

Fun Fact: Thin Ice was called Thinicetrobarrier during the 2008 April Fools Day Party because this game was combined with Astro Barrier for fun. 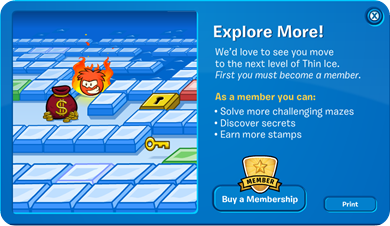