On the 7th of November Club Penguin has updated in 2008 and 2013. In 2008 new clothing and wig catalogues were released and a new pin was hidden. In 2013 a new Penguin Style was released, the Cave Mine collapsed, Herbert’s paw prints were spotted at the Boiler Room, Club Penguin began advertising the upcoming gold puffle quest, the featured postcards were updated, and Herbert’s website had a new teaser on it.

Two of the three updates in 2008 were catalogue related. Back then wigs were in their own separate catalogue so on this day both the clothing and wig catalogues were updated. The new clothing catalogue had some new winter wear items such as the Purple Vest, Green Vest, Blue Mittens, and Chullo. Other similar themed items such as the Snow Shovel, Pink Pompom Toque, and Green Turtleneck were brought back. As for the wig catalogue, it was the last one ever before Club Penguin merged it into the Penguin Style. It featured two new wigs: The Chill and The Flouncy. In total Club Penguin had seven wig catalogues, one in 2007 and six in 2008. 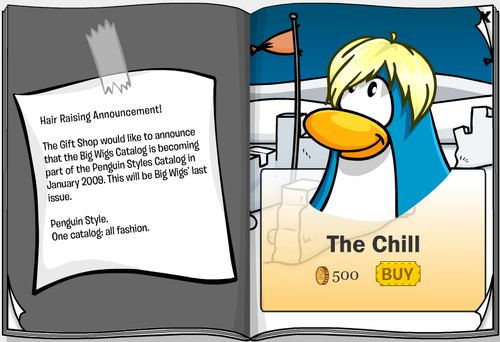 As for the new pin, it was a Snow Shovel (later renamed to Blue Snow Shovel) and could be found at the Forest. This pin is Club Penguin’s 76th pin overall and is the fourth pin to be hidden in that room.

The main update on this day in 2013 was a new edition of the Penguin Style for the month of November. The theme of the new items were outdoors and exploration. Some casual clothes were also mixed in. 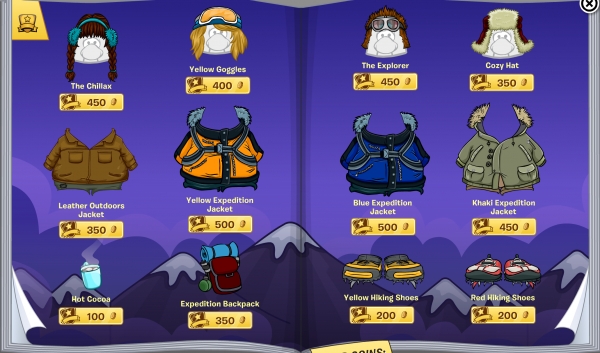 The next two updates took place in the underground. At the Boiler Room Herbert’s paw prints were spotted on the floor and a piece of the boiler was missing. At the Mine the entrance to the Cave Mine collapsed. The entrance to the room from the Hidden Lake was also closed off with rocks. The collapse of the Cave Mine was leading up to the Gold Pufffle Quest, which Club Penguin began advertising on their homepage. A new login and logoff screen advertising it was added too. Another update was the featured postcards being changed.

Speaking of Herbert, also on this day in 2013 his website was updated. It featured a helmet of sorts with an orange paw print and an antennae. This was leading up to Operation: Puffle.