The update on this day in 2009 was minor, however it’s still seen in game today. Up until March 25, 2009, membership badges did not exist. Penguins had no badge on their playercard. It used to be like this: if a penguin wasn’t your buddy, they’d just have a faceless icon in the top left of their playercard, as shown below: 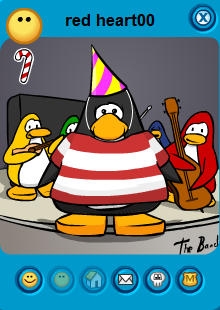 If the penguin was your buddy and they were online, that smiley face would have a mouth, becoming “:)”. If the penguin was your buddy and they were offline, that face icon with two eyes and no mouth would be a shade of dark blue. It didn’t matter if the penguin was a member or not, they all had that face in the top left. Your own penguin had a star in the top left corner. With the introduction of membership badges, that all went away and members would get a new badge whenever they reached a new milestone. For older penguins like me when the update was released, we instantly had the full membership badge.

As for 2011, that year there were several updates. The biggest one was that year’s April Fool’s Day Party beginning. Penguins could earn the Purple Propeller Hat by throwing paint (snowballs) on the easel at the Dock in order to paint a picture of a treasure chest. Once the painting was completed the treasure chest would become real and the free item would pop out of it. At this April Fool’s Day Party members could access many different dimensions via the Box Dimension. There was a scavenger hunt for members in those dimensions and once complete they would be able to obtain the Box Costume item. Rookie was waddling around during this party, too. This was his first appearance on the island as a mascot! 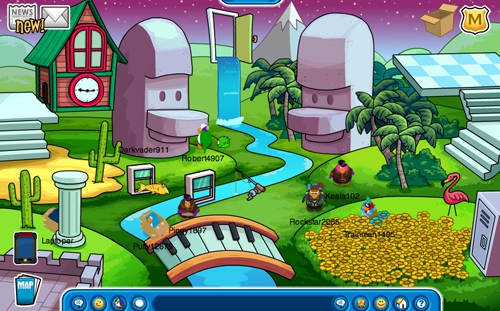 There was also a new login screen advertising the new dimensions. Also, at this party is when the Food Fight stamp was released.

In 2014 another task was available at the Muppets World Tour. You had to fly to Russia, which was the Ski Village, and meet Bunsen and Beaker. They’d give you a Beakers item if you were a member. After completing an experiment for the two muppets all players were able to collect the free Ushanka head item.