The Mine Shack was discovered in May 2006. This room was originally somewhat hidden, as it was unmarked on the map. (note: it is now marked on the map) In April 2010 in honor of Earth Day a garden and Recycling Center were added to this room. This room was given a new look on July 11, 2013. A path to the Dojo Courtyard was added and the Recycling Center was replaced with the University room. 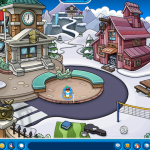