On the 19th of March there were several updates in 2010, in 2013 Businessmoose announced he was leaving Club Penguin soon, in 2014 Club Penguin released a video teasing dog puffles, and in 2015 Club Penguin replaced the Ski Lodge with the Puffle Lodge, released two new pins, and also added a new login screen.

The biggest update in 2010 was that year’s Penguin Play Awards. The 2010 Penguin Play Awards was the second one, with the first one taking place the previous year, 2009. Mascots such as Aunt Arctic were waddling around the island during this event. At the Penguin Play Awards several stage plays were nominated for different awards, and penguins could dress up in fancy clothes and vote for their favourite ones, and then the play that got the most awards would be the next play put on production at the Stage. 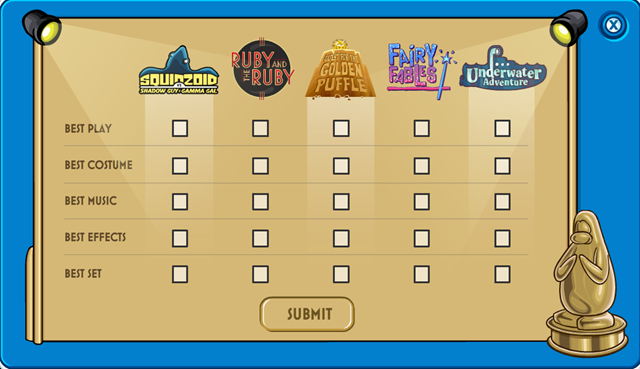 The Stage room was replaced with the Mall in 2015.

Aside from that, other updates in 2010 include the featured postcards selection being updated, a new Penguin Play Awards login screen, and also the Pet Furniture catalogue was updated.

In 2013 the Club Penguin e,ploy Businesmoose, who created videos for Club Penguin, announced his resignation on the blog. Here’s a copy of the post he made:

Can you believe that the rainbow puffle is almost here? After years of waiting, this week you will be able to adopt your very own. Exciting stuff!

I wanted you to hear it from me first that I will be leaving Club Penguin for new adventures. I’ll be around helping the team until the first week of April. Moose Monday is still happening so you’ll have a lot of chances to say goodbye – hope to see you there!. :)

Since I started in 2007, my favorite part about working at CP has always been the community. I’ve always been blown away by your imagination and ability to make the best out of any situation. Remember that YOU are the reason why Club Penguin is so special!

Now onto some exciting news! As you can probably imagine, there are a few blogger/moderators eager to take my place. Polo and I thought it would be awesome if you helped us make that decision!

Here are our four nominees:

Whoever you choose, make sure you give them the same warm welcome you gave me. I know it will mean the world to them — it did for me!

In 2014, the team released a video teasing dog puffles. It stars both Megg and Polo Field.

As for 2015, the biggest update on this day that year was the Ski Lodge being overhauled and turned into the Puffle Lodge. As a result the attic room was also changed and now the lodge was available on mobile.

Two new pins released, too. The Pi Pie Pin, which is Club Penguin’s 306th pin overall, was hidden in the Book Room. This pin is the fourteenth pin to have been hidden in that room. There was also the Puffle Guide Pin, placed in the Puffle Lodge for a few weeks, to go along with the room renovations.

The final update in 2015 was a new login screen. It advertised the upcoming Puffle Party, saying “join the expedition!”