In 2005 there was a single update. That update was you could now access the igloos of other players from the map! There was now an igloo icon that you could click on to view the list of open igloos on that server. 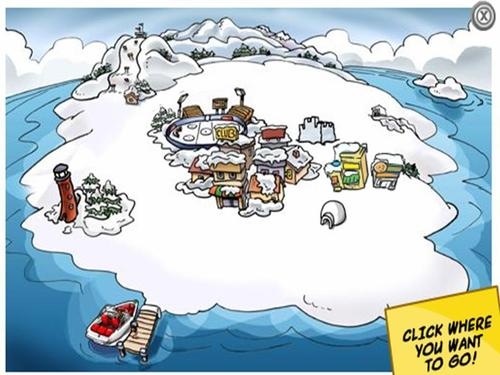 In 2010 there were three updates. A special limited time postcard you could send to your buddies was released. The postcard contained a free item, the Holiday Toque. The second update was the Ice Rink returning. As a result the sports catalogue was updated with hockey and ice skating related items, which was the third and final update in 2010.

In 2012 there were three updates. Both the Holiday Party and Coins For Change began, which Rockhopper arrived at the island for. At the party all players could obtain the Blue, Yellow, and Pink Lightbulb head items from Santa’s Sled. All players could also collect the Big Cozy Chair Background at the Ski Lodge. There was also a daily gift calendar. Every day from December 20th through the 25th two new items were available, one for everyone and one for members. There were clothing items, furniture items, and, on the final day, even an igloo.

Alongside the 2012 Holiday Party was Coins For Change. There was a bakery room where you could buy virtual cookies, with the funds going towards Coins For Change. Players could also donate 100, 500, 1,000, 5,000, or 10,000 coins to building safe places, medical help, and protecting the earth. The first time you donated you would receive the CFC 2012 Pin.

As for Rockhopper, he brought with him the Piratey Stuffie hand item for all players, plus members could purchase a couple clothing items and the Holly Jolly Rug furniture item.

In 2013 Club Penguin added new rooms to their mobile app. Penguins could now go to the Dock, Beach, Lighthouse, and Snow Forts on the iPad. Back then the app was only available on iOS for the iPad.

Finally, in 2014, there was an update at the Merry Walrus Party. A new tradition you could participate in was now available. You could ring eight bells at the Plaza. Once done 500 coins would be donated to Coins For Change, plus all players could collect the Big Bell hat item and members could collect the Jingle Apron body item.