The Plaza was added to Club Penguin in early 2006. At first it was just the Pizza Parlor and Pet Shop that were here. The Stage was added to this room in fall 2007. In one of the pictures below, the sign that says “Puffles” took you to Puffle Roundup. It was there because the Pet Shop was not yet open. On December 6, 2012 the room was given a brand new look. On April 5, 2013 background sound effects were added to this room. 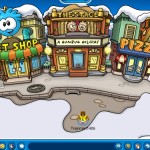 One thought on “Plaza”