In 2008 Rockhopper arrived again for a visit. His free item for all players was the Eye Patch, a returning item. His rare items catalogue contained two clothing items and a furniture item that members could purchase. The two clothing items were the Sea-Worthy Dress and Sea-Worthy Suit, both costing 500 coins a piece. The furniture item was the Desert Island, costing players 850 coins a piece. There weren’t any hidden items in his catalogue. 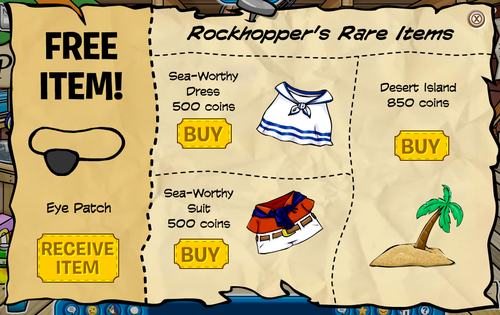 Also on this day in 2008 the igloo decorating contest began. This was a yearly tradition on Club Penguin. Alongside the contest the igloo music was also updated. The new tracks were Halloween, Halloween Dance, and Epic Battle. The igloo catalogue was updated and added the Jack O’ Lantern Igloo. The furniture catalogue was also updated to include a few new items such as the Laboratory Desk, Control Terminal, and Plasma Ball. Some Halloween themed items from past years were brought back, such as the Jack-O-Lanterns.

In 2011 Club Penguin had a small update. Ten new drawings were now on display in the Book Room.

It’s not an in-game update, but in 2012 something very sad happened. Billybob announced on Club Penguin’s blog that he was leaving Club Penguin. Here is his departure post:

I hope you’re all as excited about the Halloween Party as I am. The office is buzzing today, it’s going to be amazing!

I wanted to make sure you heard it directly from me, after 7 incredible years at Club Penguin, I’m going to be moving on. I’ll be around for the next few months to make sure everything is all good. Then I’ll be focusing on building some cool stuff for schools. I hope I’m able to help with learning the same way I have been able to help build Club Penguin.

I have had such an incredible time being a part of Club Penguin over the years and serving you guys everyday. The Club Penguin Team is better than ever, and the plans we’ve made for the next year are awesome! My friends Polo Field and Businesmoose will keep you updated with all the latest behind-the-scenes updates here on the blog Even though I won’t be working at Club Penguin anymore, I’ll still be around and logging on to hang out.

You are the reason I’ve done this for so long and I am so thankful you’ve let me be a part of your lives.vYou are what makes Club Penguin special. Never forget that.

The biggest update in 2013 was the Halloween Party beginning. Players could trick or treat around the island. By collecting the cursed candies from trick-or-treating you could transform into a werewolf, vampire, or zombie. The party also featured six special emotes, creepy costumes for members, and even a new Halloween Giveaway Background from Rookie. The party items could be bought with candies instead of coins. 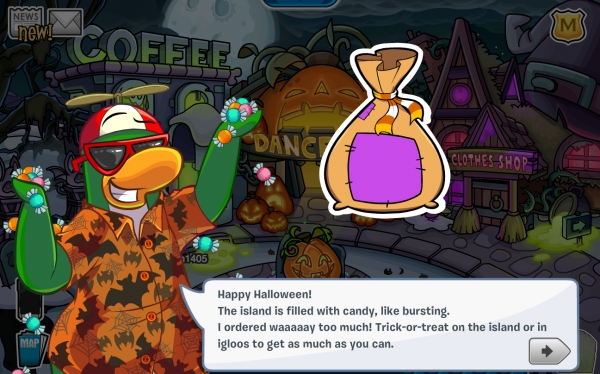 The final in-game update was the Tombstone Pin, Club Penguin’s 257th pin, being hidden at the Boiler Room. This pin is the 14th pin to be hidden in that room.

In the real world the 23rd issue of Club Penguin’s magazine was now available in the UK and Republic of Ireland. The theme of this issue was Halloween.