The one update that occurred in 2007 was the Tour Guide feature being released. Club Penguin’s players that were at least 45 days old could go to the Plaza and take the tour guide quiz. Originally the tour guide booth was located at the Plaza but it was moved to the Ski Village in May 2007 when the Forest was released, as it was in the way of the path to that room. As long as you passed the quiz you would receive the tour guide hat and would be allowed to give penguins a tour of the island. Leading up to this update some players hacked the Tour Guide Hat so there were penguins on popular hangout servers such as Frozen wearing a weird new hat with a question mark on it.

On the 26th of January in 2012 there were many updates. The main update was the event/party for that month, the Underwater Expedition. Rookie caused the island to tilt due to ordering a bunch of anvils. The Underwater Expedition was a maze. Once you finished the maze you would wind up in a secret room where members could collect the Submarine Suit. During this event Rookie was waddling around. He had a new giveaway background.

Also in 2012 the Beach Chair Pin was hidden at the Dance Club. It was located in the bottom left on the speaker in the old room design. This is Club Penguin’s 194th pin and was the sixth pin to be hidden in that room.

A third update in 2012 was the 66th field op. This mini mission was located at the Lighthouse behind the drums. It was originally at the piano but changed shortly after. The mini-game at the end of the field op was to guide the bot to recharge the batteries.

The final update on the 26th of January took place in 2013. The Age of Dinosaurs igloo background was now available for members to collect at the Prehistoric Party. 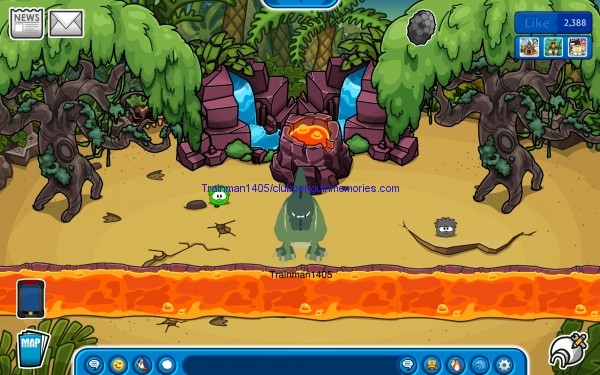