The Dance Club is one of the first rooms on Club Penguin. Back at the beginning before Puffles were out there was no Green Puffle on the speaker, and there was no DJ3K or Dance Contest game. In early 2010 it was slightly expanded with a disco ball and lights when many penguins were in the room, as shown below. On November 1, 2012 it was given a complete redesign. On December 6, 2012 the design of The Keeper of the Boiler Room was modified. 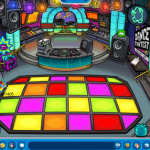 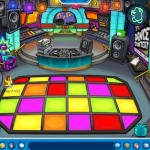