On the 14th of November there were updates in 2005 and 2013. In 2005 version 1.02 of Club Penguin was released featuring some nice enhancements and in 2013 there were many updates including the Gold Puffle being released, PH waddling around, a new pin, and more.

Rather than explain the 2005 update in my own words, I think reposting the original blog post Billybob made about the update is better. We all love Billybob and this post is a part of history!

We released a new update today that should fix a few issues and make most of you very happy.

Room Router: Some of you may have already noticed, but recently we built a room router. What is a room router you ask? Well, because the town was getting too full, we made the game start (or rout) you in a different part of Club Penguin if the town gets too full. This makes it quicker to join the game because there are less penguins to load when you first start. This also spreads penguins out a bit more which makes it better for everyone.

Issue Fix: We found out that some of the log-in or “lost connection” errors are related to HUGE buddy lists. Some people have over 2000 buddies. It is great that you have so many friends, but it means the server has to check through the entire list before it lets you on. In order to fix that, we had to limit the buddy lists to 100 buddies for free accounts and 200 for member accounts. This limit might be raised in the future, but for now we needed to fix this problem before it got any bigger. If you have a huge buddy list, please manually edit it, or email your penguin name to support@clubpenguin.com and ask to have it reset.

Great news!: Because we are releasing so many new items and a furniture catalog coming tomorrow, we wanted to make it even easier to buy all that cool stuff! So, we have decided to more than double the coin payout in every game! Now before you faint with happiness, just take a deep breath and go play your favorite game to earn more coins than ever!

That’s it for now, check out the new furniture catalog launching tomorrow! Until then…

What an important update that was! On to 2013. The first of many updates in 2013 was a new pin. The new pin was the Herbertech Logo pin and you could find it at the Lighthouse. This pin is Club Penguin’s 259th pin and was the seventh pin to be hidden in this room. The biggest update on this day in 2013 was definitely the release of Gold Puffles. Members could take the Quest for the Gold Puffle and once done, adopt it. As a result of the quest the Mine got a new design. The Gold Puffle was added to the Puffle Handbook and along with this big launch PH was waddling around the island. She had a new giveaway background. 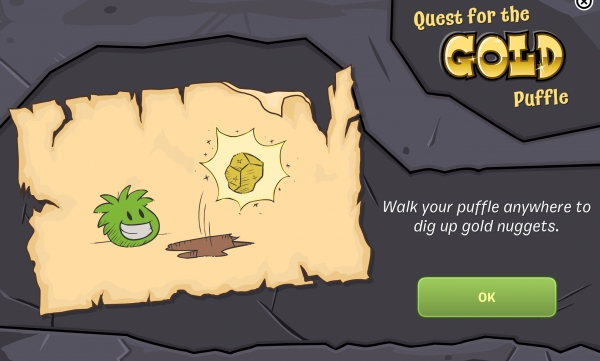 Along with all those big updates there were minor ones such as a Operation Puffle advertisement being added to Club Penguin’s homepage slider. The 24th issue of Club Penguin’s magazine was also released in the United Kingdom on this day. The theme of this particular issue was the holidays.