Wow, I can’t believe it – two years ago on January 1, 2011, I launched officially released ClubPenguinMemories.com to the world at exactly midnight. (Eastern Standard Time) Some of this I copy/pasted from last year’s review since it still fits.

Like I said last year, back in late 2010 when first starting to move everything from Piczo to WordPress I didn’t think it was going to be worth it. But boy, I was way wrong. Here’s last year’s stats:

The main thing I noticed over the past two years is viewers like you LOVE originality between my theme and posts – and that you love my nearly daily if not completely daily posting. I do try my best to have a different looking website than other Club Penguin Blogs – theme wise, navigation bar wise, writing wise, heck – even purpose of the website wise. The irony in this is I’m usually not one to be creative in real life. I’m one to joke around, so don’t take this personal or anything – I once said to some people “Club Penguin Blogs are like lyric websites – there’s so many and they all have the same content.” I was joking when I said it, but it’s kind of true – there’s tons of music lyric websites out there with the same song lyrics listed. Why so many? I’d love something new. Then there’s lots of Club Penguin Blogs out there, all posting the updates. (and lots of famous blogs have some sort of blue theme :P) There’s nothing wrong with that, even though I’m jokingly poking fun – everyone likes different blogger’s writing styles, how quick they are at posting, their theme, etc. Don’t take things I say like that to heart, I promise I don’t mean it in a bad way. I just do what I like and hope others like it too. All of this hard work has definitely paid off. And I’m highly humbled by this. I’m sort of on a mission – to change the way Club Penguin Blogging is and loosen it up a bit. Rather than just post cheats, let’s have some fun with other things too!

But sure enough, every month this year (with the exception of this month) this website got more views than the previous month. And we beat the record number of people online at once and the most views in a day multiple times this year. Here is a brief look at the stats. I will be honest, I don’t like to reveal my website’s stats too often because they are high and I do not want others to feel down because my website is doing better than theirs. It just takes time, practice, and lots of hard work. I’ve been doing this for five years now, keep that in mind.

Posting wise, I’ve broken Club Penguin News numerous times, published exclusives that nobody else has, been first to post when they updated quite often, and I’ve made a lot of friends through my writing. Here’s my top five posts (in my opinion) that I’ve made in the 2012.

Here’s to a fantastic 2013 year of blogging and many more friendships! I’ve got lots planned for Club Penguin Memories this year, such as more contests, more features, and much more page content! I hope you all had a great year with Club Pegnuin Memories. 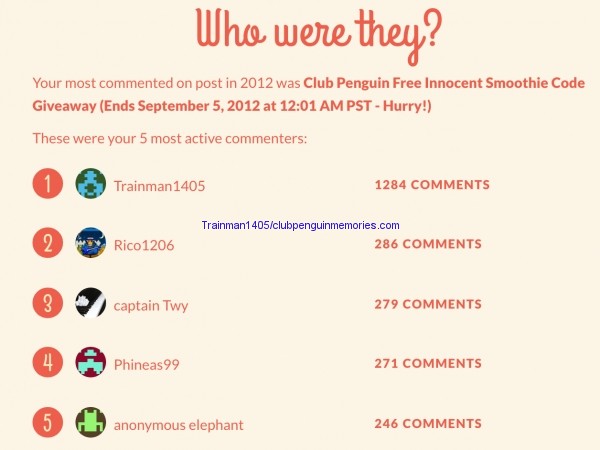