Happy March! On the 1st of March there has been updates on Club Penguin in 2011, 2012, and 2014. In 2011 there was construction in the Pet Shop to give it a new design, in 2012 there were several updates such as a new edition of the clothing catalogue, and in 2014 a new item was available at the Fair’s prize booth.

There was only one update in 2011. The Pet Shop was going to be given an all new look, the one you see in-game today, so to prepare for it construction began inside the room. 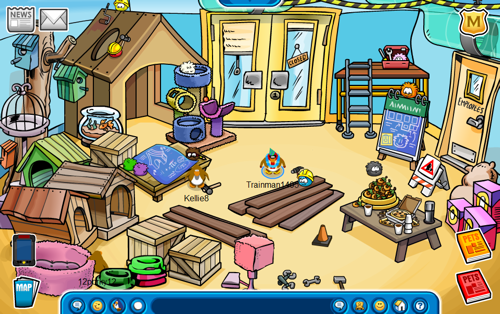 As for 2012, there were multiple updates. The first update was noticed as soon as penguins logged in, as it was new loading animations. When things are loading on Club Penguin, you see a blue screen and a penguin either cart surfing, shovelling snow, or making pizza. These are the loading animations they added on this day in 2012. Before this update it was just the blue background with a white arrow that spun around and progress bar below it showing what percentage of loading was complete so far.

Another update in 2012 was the Life Vest item being added to the Beach for penguins to pick up, since February’s big event, Rockhopper’s Quest, was still happening. There was also the 71st field op, located on Rockhopper’s ship. The mini-game to complete the field op was repairing the system by guiding the bot.

The final update in 2012 was the March edition of the Penguin Style being released. The clothing catalogue contained outfits to match every puffle colour that existed at the time. The items were available for only one month. 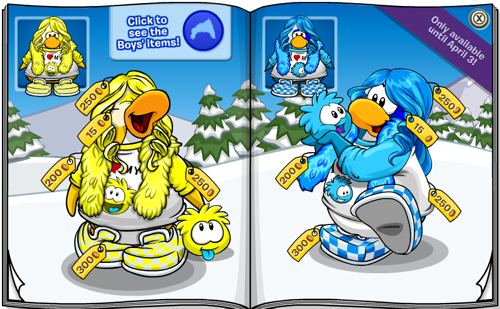 In 2014 a new item was available at the Fair’s prize booth. It was the Cool Down Hat. All players could obtain it by redeeming 1,000 tickets. This was the final item to be released at the 2014 Fair.