On the sixth of February Club Penguin has updated in 2009 and 2014. Both years had a new version of the Penguin Style, plus in 2014 a new pin was hidden, the game was launched in Russian, plus more. Also, in 2015, Club Penguin revealed the full audio for Cadence’s new song “You Got This”.

The February 2009 Penguin Style had new shirts and other spring wear for penguins. This was the only update on this day that year. 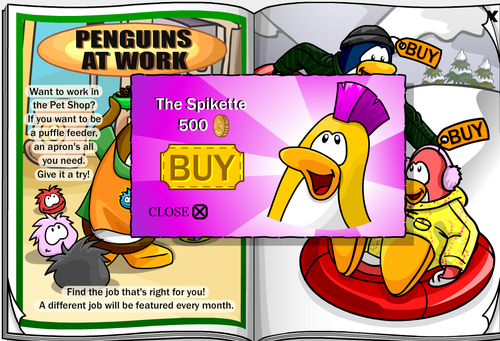 2014 had many more updates compared to 2009. Just like in 2009 a new edition of the penguin style catalogue was released for the month. It featured Fair themed items to go along with that month’s upcoming event. A login and logoff screens advertising the Fair were also added.

Another update in 2014 was Club Penguin launching in Russian. This marked the fifth foreign language the game launched in, with the others being Portuguese, Spanish, French, and German. Both the Russian and German versions of Club Penguin no longer exist.

The final main update in 2014 was a new pin being hidden on the island, the Pixel Puffle. It is Club Penguin’s 268th pin overall and is the eighth pin to be hidden at the Hidden Lake.

The rest of the updates that happened in 2014 were minor. Club Penguin released their Safety Quiz, some minor adjustments were made to the Treasure Book in the Clothes Shop, and the featured postcards were updated, now listing the Squidzoid, Find the Pin, Band Practice, Penguin Band Rocks, and Fair postcards. Also, in the real world, the 27th issue of Club Penguin’s magazine was also released.

Finally, in 2015, Club Penguin revealed the full audio for Cadence’s new song “You Got This”.