In 2006 the second PSA (Penguin Secret Agency) mission was released. The title of this mission is “G’s Secret Mission”. In the mission Gary the Gadget Guy has you carry out his orders, as you need to run some errands for him. In the mission you get stranded and the wilderness and need to make your way back out.

In 2009 three different updates took place. The Soccer Stadium was replaced with the Ice Rink, something that happens every year around this time of year. Along with the room switch the sports catalogue was updated to include hockey and ice skating items. Finally, the big event of that month, the Great Snow Maze, was released. The Great Snow Maze is exactly what it sounds like: a giant maze made out of snow. It’s like the Underwater Expedition we had in January 2012 or the Cave Maze we had earlier this year, but with snow. The maze only for members. At the end you could collect a free Yeti Costume. 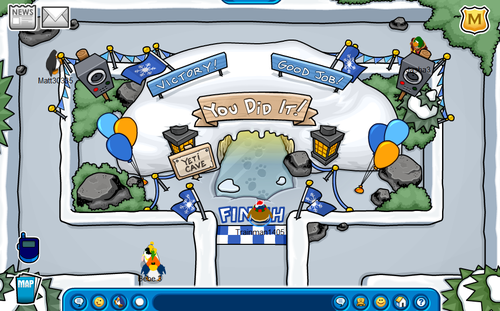 Next is 2013. Penguins could now rescue orange puffles in the Puffle Chase game. Once done with the task, members could collect the free Thermos item.

Finally, in 2014, a new pin was hidden on the island. All players could find the new Crab Lock Pin at the Coffee Shop. This pin is Club Penguin’s 292nd pin overall and is the fifteenth pin to be hidden in that room.