On the 11th of July there have been updates in 2008 and 2013. In 2008 the play at the Stage was changed and in 2013 there was a new penguin style, Haunting of the Viking Opera returned to the Stage, a new pin was released, the postcards were updated, and more!

On this day in 2008 the Stage play was changed to Squidzoid vs. Shadow Guy and Gamma Gal. This was the stage play’s second showing. The first one was in January 2008.

As for 2013, the Penguin Style was updated for the month and featured some summer outfits. In addition to three new pages of items there was also two new backgrounds, both Star Wars themed. On Club Penguin’s mobile app (iPad only at the time) there was also an exclusive Boba Fett costume members could purchase.

The play at the Stage was changed in 2013 too, with Haunting of the Viking Opera making a reappearance for the first time in two and a half years. The only difference between this showing and the previous one is that the pin for the play was not available.

The Death Star was also spotted in the sky in many rooms. It could be seen from the Dock, Beach, Ski Village, Mountain, Town, Iceberg, and telescope at the Lighthouse Beacon. The purpose of the Death Star was to tease that month’s upcoming Star Wars Takeover. 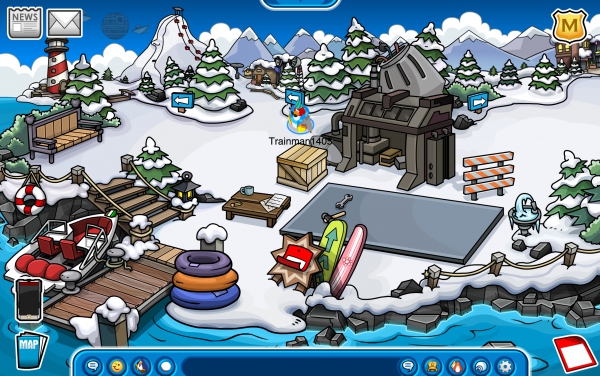 As for the rest of the updates, there was a new Text Book Pin located at the Dance Club, the University room was released, Puffle Digging was updated to include actual items instead of only coins, there was a new Puffle Digging login screen and a Star Wars logoff screen, and the featured postcards were updated with the Let’s Explore, Haunting of the Viking Opera, and Night Club postcards.