This room was released the same day as the Lighthouse. Two or three months after opening, Jet Pack Adventure was added to this room. You can also view the ocean and see when Rockhopper is coming by looking in the Telescope. In August 2011 it was given a slightly updated look. 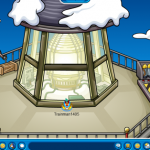