There was one in 2011. The Pet Shop was going to be given an all new look. (the one you see in the room today) To prepare for this, construction in the room began to take place. 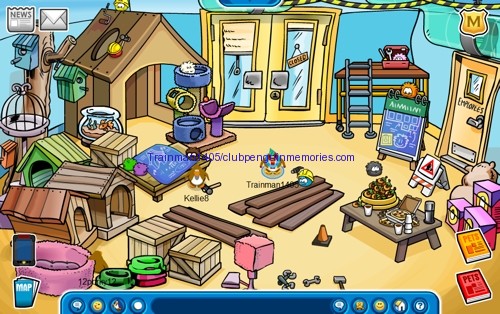 There were several updates in 2012. The most obvious one would be Pay Day, as it was the first day of a brand new month. The second update was noticed as soon as penguins logged in – new loading animations! When things are loading on Club Penguin, you see a blue screen and a penguin cart surfing, shoving snow, or making pizza. Before the update it was just a white spinning arrow and progress bar.

Another update was the Life Vest item being added to the Beach for penguins to pick up, since February’s big event, Rockhopper’s Quest, was still taking place. There was also the 71st field op, located on Rockhopper’s ship. The game to complete it was repairing the system by guiding the bot. The final update was that month’s clothing catalogue with outfits to match every Puffle colour.