So far in Club Penguin’s history updates have occurred on three different years. Those three years are 2006, 2008, and 2011. 2006 was the most minor year, in which one new pin, the Jet Pack Pin, was released. It was located at the Beach on the rocks next to the Lighthouse. The Jet Pack Pin was to go along with the release of the Jet Pack Adventure game, which was released several days before on November 6th. As for 2008, at the time the Dojo reopening was soon coming. Because of this a sign was added to the inside saying “Training Coming November 17”, referring to Card-Jitsu. The at the time snowed-in Dojo Courtyard was also updated, with more of the room being revealed. (it was covered by snow) 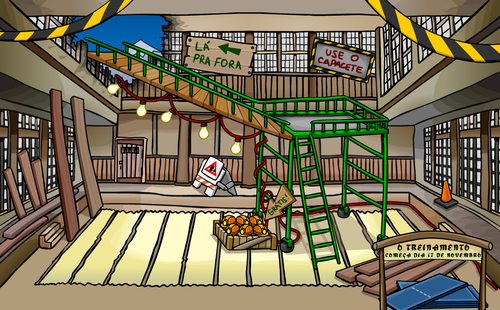 Finally, in the year 2011 on this day there were three updates. There was the 55th field op, which was located at the Pet Shop in the lower corner. The game was to power the chipset by guiding the micro battery. There was also both a new igloo catalogue and a new furniture released. The igloo catalogue contained only one new item was added, the Woven Rice Mat Flooring. On the other hand, the furniture catalogue featured some new ninja related items such as the Ninja Gate, Training Dummy, and Noodle Stand.

In addition, Oarca asked me to mention the Oarca Sunday meetup that is being held tomorrow, November 11. It’s at 4:30 AM PST in the server Snow Bound at the Snow Forts.