On the 15th of May Club Penguin has updated in 2009 and 2014. In 2009 there was a new igloo catalogue and a new furniture catalogue, plus Rockhopper was spotted in the telescope. In 2014 Club Penguin released a new furniture and igloo catalogue for the month, the igloo music was updated, a new pin was hidden, a time portal was placed at the Snow Forts by Gary, and the Snow Forts room was now available on mobile devices.

The May 2009 furniture catalogue contained medieval themed items. Some of the items in the catalogue were the Celtic Rug, Ornate Mirror, Archer’s Window, and Penguin Knight Sculpture. 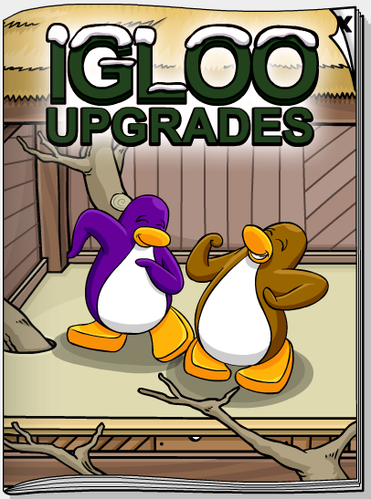 The final update in 2009 has to do with Rockhopper. He was spotted in the telescope at the Lighthouse Beacon, coming towards the island. His ship had many plants and trees on it, which were for June’s Adventure Party.

Just like in 2009, in 2014 there was also a new furniture and igloo catalogue, except now they were combined into a single catalogue rather than being separate. The May 2014 furniture and igloo catalogue contained futuristic and space themed items such as the Holo-projector, Starship Console, Rocketship Lava Lamp, and UFO. The catalogue also contained the brand new Space Dome Igloo, which cost 2,000 coins, and also the Distant Planet Igloo Background, which costs 1,800 coins. Along with the new catalogue the igloo music was also updated, containing the new tracks Space Zoo, Space Battle, Ultimate Battle, Welcome to the Future, Extreme Planetary Force, Strange Galaxy, and Zero Gravity Disco. 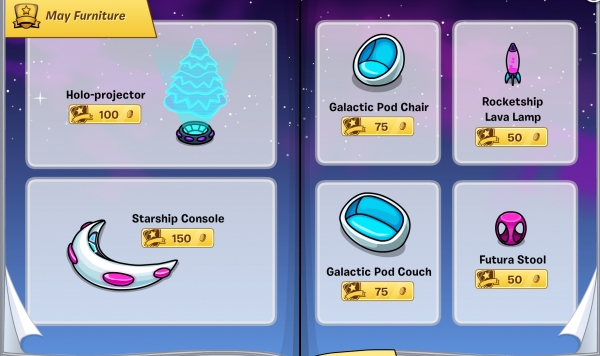 The new pin hidden on this day in 2014 was the Picnic Bundle Pin. It is Club Penguin’s 277th pin overall and is the eighth pin to be hidden at the Lighthouse.

Another update on this day in 2014 was a time portal being placed at the Snow Forts by Gary. Later in the month players would be able to travel through time and go to the future, which was that month’s party, the Future Party. The Time Trekker was hooked up to the gigantic portal.

The final update on this day in 2014 has to do with Club Penguin’s mobile app. Players could now visit the Snow Forts room on the app.