On the 3rd of April Club Penguin has updated in 2009 and 2014. In 2009 the first winners of the first ever Penguin Play Awards were announced. There was also a new clothing catalogue and more snow sculptures were added to the island for the Snow Sculpture Showcase. In 2014 there was a new clothing catalogue, a new pin, Battle of the Ancient Shadows returned to the stage, Rockhopper was closer in the telescope, the postcards were updated, there was a new login and logoff screen, and a new magazine issue was released in the UK.

At the 2009 Penguin Play Awards the Quest for the Golden Puffle stage play snagged nearly all the awards. The play won in every category except Best Costume, which the Fairy Fables play was victorious with. 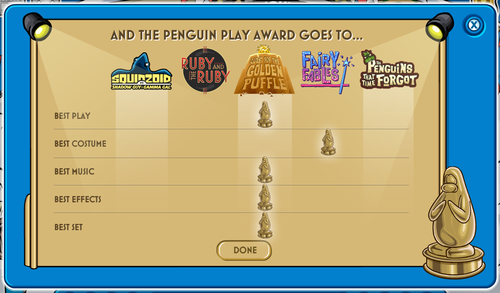 Another update on this day in 2009 was that month’s Penguin Style edition being released. It featured a combination of new and returning Spring-themed items. Here is one of the pages from the catalogue: 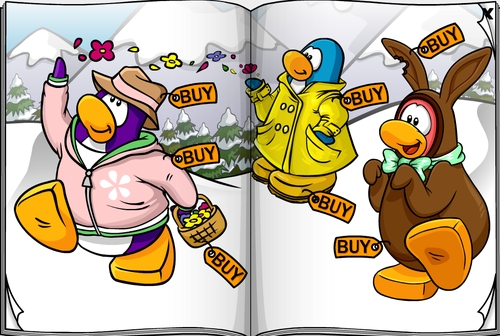 The final update in 2009 was the final five Snow Sculpture Showcase winners being added to Club Penguin for the remainder of the event. The winners were Doudou15, Zohannah7, Monalooka, Giraffe106, and Dj Girl Rox. 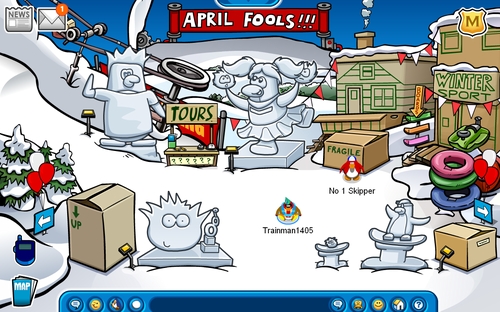 The biggest update on this day in 2014 was the new Penguin Style edition for April. The catalogue contained new items such as the Archaeologist Hat, Outback Traveler Outfit, Explorer’s Bag, and the Orange Kittytail wig. 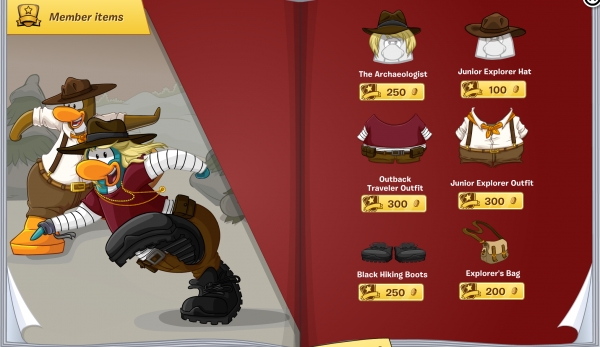 There was also a new pin hidden on this day in 2014. The pin was the Cream Pie Pin. It is Club Penguin’s 274th pin overall and is the eighth pin to have been hidden at the Mine Shack.

Also in 2014 the Battle of the Ancient Shadows play returned to the Stage. This ended up being the play’s third and final showing.

The final few updates in 2014 were Rockhopper being closer in the telescope, the featured postcards being updated to list the Puffle Performance, Turn Green, and Cool Puffles postcards, a new login and logoff screen advertising new puffles and the Puffle Park, and the 29th issue of Club Penguin’s magazine being released in the United Kingdom.