On the 19th of April Club Penguin has updated in 2012 and 2014. In 2012 the Earth Day Party began, Aunt Arctic waddled around the island, a new pin was hidden, and a new field op mission was released. In 2014 a new item was available at the Puffle Party.

At the 2012 Earth Day Party several rooms were decorated and Aunt Arctic waddled around the island for the event. The decorated rooms at this event were the Snow Forts, Town, and Plaza. At the Town and Plaza all players could pick up a Safari Helmet. At the Snow Forts members could purchase four animal costumes: the Lion, Rockhopper Penguin, Snow Leopard, and African Painted Dog. 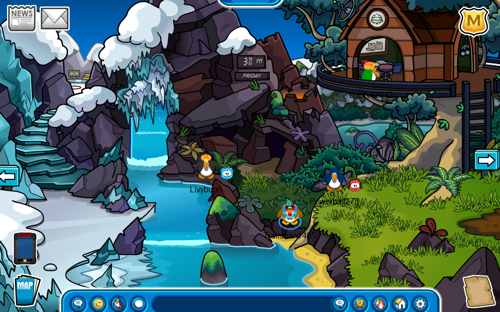 The new pin hidden on the island on this day in 2012 was the Forest Pin. This pin is Club Penguin’s 201st pin overall and is the eighth pin to be hidden at the Underground Pool.

There was also a new field op mission, the 78th one. To complete the mission players had to go to the Snow Forts, climb up the ladder to the tree house, then break the code by scanning symbols to find the right combination.