Since 2008 was a leap year, there was one extra day in February, February 29th, and it just so happens to be that Club Penguin had some updates on that day! There were four updates. There was a new pin, a new sports catalogue, an update to the Ice Fishing game, and an update relating to Rockhopper and his ship, the Migrator.

The new pin was the Aqua Grabber Sub Pin, previously called the Aqua Grabber Pin. It is Club Penguin’s 55th pin overall and could be found at the Cave above the lifeguard chair. This is the third pin to have been hidden in that room.

Another update in 2008 was an update to the sports catalogue. Back then the Sports Shop existed where the Everyday Phoning Facility currently stands and the catalogue was not available at the Stadium. A few new items were added to the catalogue, one being the Flashing Lure Rod, an item that can be used to catch grey fish in Ice Fishing, a feature that was also added on this day.

The final update in 2008 was the Beach being updated for the Save The Migrator Campaign, as Rockhopper’s ship was hit by an iceberg, sank, and was in the middle of being salvaged thanks to the Aqua Grabber machine Gary built. The update to the Beach on this day added the items that were salvaged in Aqua Grabber. 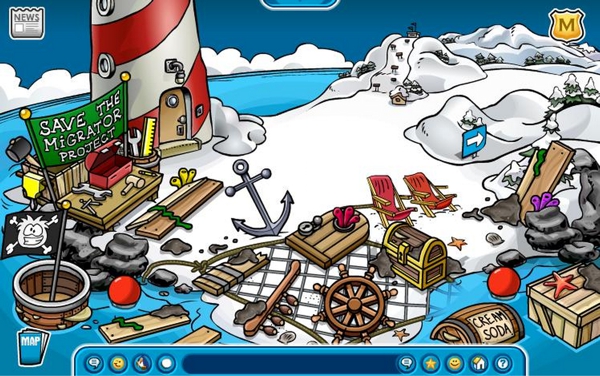