Club Penguin has only updated on the 14th of October in 2011. There were many updates on this day, from catalogues to login screens, all the way to puffles!

Starting with the more minor updates, there was a new login screen advertising the Halloween Party, saying “Get ready to haunt the island”. The map was also updated with a small new feature. Clicking the pets icon shows what games you can bring a certain coloured Puffle to. For example, a red puffle brought to Catchin’ Waves plays in-game with you. Another update was the igloo music being updated with four new tracks. They were Monster Masquerade, Ramp It Up, Air Bubble Boogie, and Spookiest Swam. The final minor update was a new field op, the 51st one. Its location was the waterfall at the Hidden Lake. The mini-game was to break the code by getting the correct symbol combination.

There were also a couple puffle related updates in 2011. The first one no longer exists, and I don’t know when it was removed. Players would get a little notification above the igloo icon in the bottom chat bar notifying you when your puffle is hungry and needs to eat. In igloos themselves, the thought bubbles over a puffle when they’re hungry, want to be played with, etc were re-added. They were removed in early 2011 when Club Penguin overhauled the puffle system. PH would also now appear to show you how to take care of your puffle when clicking on one in your igloo for the first time. The ability to purchase Puffle Hats and Puffle Furniture from the puffle settings in your igloo was also new, and statistic bars such as how tired or hungry a puffle is were re-added, as they too were removed back in early 2011 when Club Penguin overhauled the puffle system. 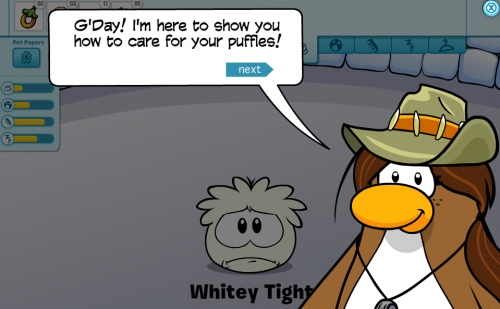