On the 11th of September Club Penguin has updated in 2009 and 2014. In 2009 more prizes were now available at the Fall Fair, a new pin was hidden, the play at the Stage was updated, the Penguin Tales 2009 was released, and some new postcards were released. In 2014 there was a new furniture & igloo catalogue and the igloo music was updated.

The 2009 Fall Fair had been going on for a few days already so new prizes were added to the booth, something Club Penguin did every year. They new items were the Stripey Hat, Curly Mustache, and Snack Stand, which is a furniture item. I had actually leaked what the upcoming Fair items were before they were released. 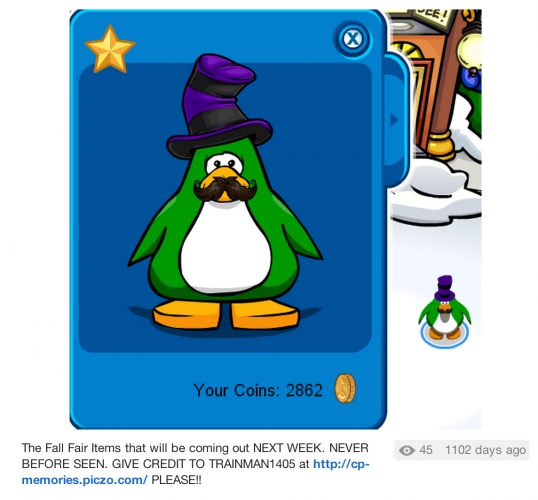 The next update in 2009 was a new pin. The 101 Days of Fun Pin, Club Penguin’s 99th pin, was hidden at the Pizz Parlour. This is the sixth pin to be hidden in that room.

Another update in 2009 was The Penguins That Time Forgot stage play being shown for a second time. It was first there in June 2008. The other big update in 2009 was the Book Room Writing Contest Penguin Tales (Volume 3) book being added to the Bookshelf in the Book Room. Several months earlier Club Penguin had asked for players to submit their short stories and they were now published and could be read by others!

There was also a mysterious Black Puffle at the Dojo Courtyard, Ninja Hideout, Forest, and Ski Village. It was a dubbed to be a Ninja Puffle.

The final update in 2009 was the postcard catalogue was updated.

In 2014 there was two updates, both igloo related. The first one was the furniture & igloo catalogue being updated for the month of September. It contained school themed items. The catalogue also contained the all new Sharks’ Gym Igloo, costing 1,500 coins. 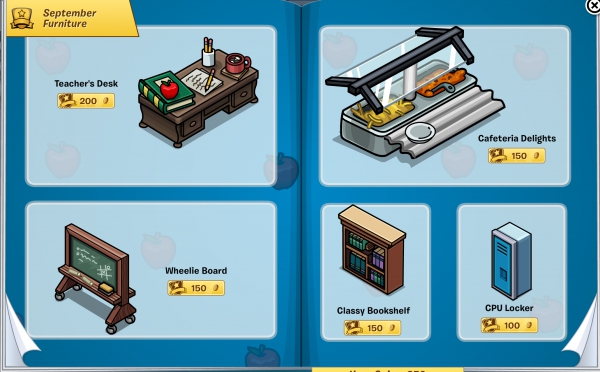