On the 30th of April Cub Penguin has had updates in 2010 and 2013. In 2010 there was Medieval Party construction, a new login screen, and new igloo music. In 2013 a new robot and free item was available at the 2013 Marvel Superhero Takeover.

The biggest update on this day in 2010 was construction beginning for that year’s Medieval Party. For the party’s preparations crystals were at the beach as well as a crate and blueprints, some more boxes and other supplies in the Plaza, as well as other crates and objects at the Underground Cave/Pool, Ski Village, Town, and Snow Forts. A login screen advertising the party was also added. 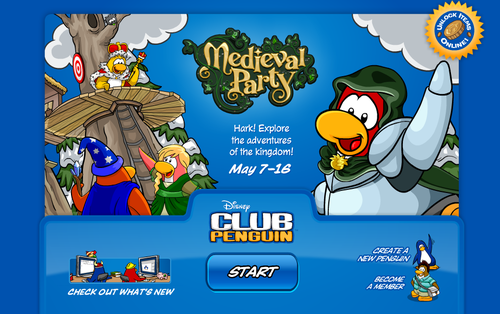 The final update in 2010 was new igloo music. The new tracks you could play in your igloo were Quest for the Golden Puffle, In the Tower, and Puffle Rescue: In the Cave.

In 2013 there was an update during the Marvel Superhero Takeover. The sixth robot model could now be built to destroy the island and the Ooze Power Gloves were now available for members.