On the 27th of April Club Penguin has had updates in 2006, 2007, and 2013. In 2006 the Find Four game was released and in 2006 Rockhopper arrived for a visit and opened the Ship Hold on the Migrator, the Pirate Party began, a new pin was released, and a new book was added to the Book Room’s bookshelf. In 2013 a new robot and free item was available at the Marvel Superhero Takeover.

On this day in 2006 the Find Four game was released, located at the Lodge Attic. The game ended up being more popular than anticipated so the following day the team added some more Find Four tables to the Ski Lodge. Here is Billybob’s original post:

We are proud to announce our newest game in Club Penguin… Find Four! This has already become on of our favorite games and we hope you like it too! If that wasn’t enough exciting news, we decided to build a whole new room for the game above the ski lodge called “the attic.” So head up there to play and have some fun! You never know, you might just meet some new buddies. Don’t forget to let us know what you think.

In other news: We’re hard at work exploring the caves under Club Penguin. We can’t give any more details, but it might have something to do with that door that is in the “boiler room” picture from the last news post. :) We will give more info next week!

The following year, 2007, Club Penguin also had a handful of updates. Rockhopper arrived for his sixth visit, and along with that he brought the Puffle Bandana head item for all players and the Captain’s Coat clothing item and Porthole and Steering Wheel furniture items for members. 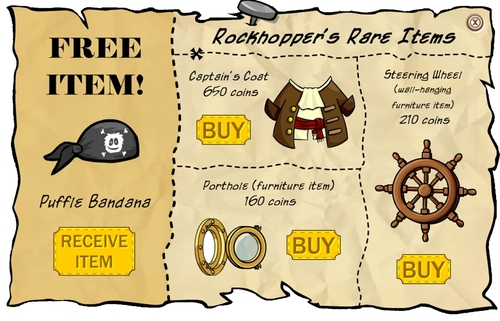 Also in 2007 that year’s Pirate Party began. The party was accidentally released about six hours early, around 5:00 PM PST the 26th of April, and I was one of the few penguins to see the party before they took it down, roughly an hour or two after it was accidentally released ahead of schedule. The free item at the party was the Sailor Hat, which could be picked up by all players at the Plaza. 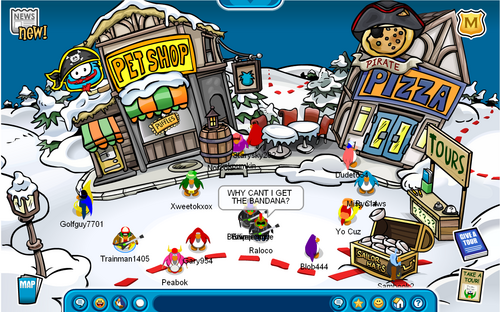 The final update in 2007 was the Penguin Tales Spring ’07 being added to the Book Room’s bookshelf. It features three short stories written by players of Club Penguin, as Club Penguin had held a Book Room Writing Contest. 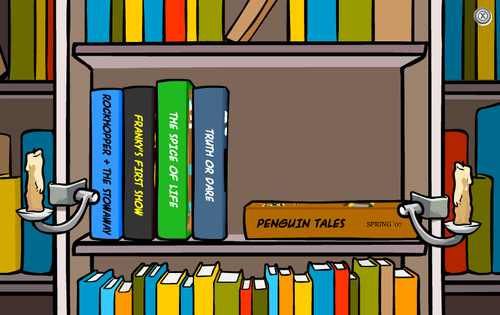 The three stories are Pizza Parlor Panic by Orantango, Comoica’s Jetpack Adventure by Comoica, and The Legend of the Gold Puffle by Icmer.

The final year with updates on the 27th of April is 2013. A new robot and the Magma Power Gloves were now available at the Marvel Superhero Takeover.