Back in October of 2014 Club Penguin Team members such as Megg and Polo Field seemingly abandoned their Twitter accounts in favour of tweeting from the official Club Penguin account. It seems like they have *kind of* changed their mind though.

Initially leading up to the account abandonment Polo Field wasn’t tweeting much, then like I said in October they announced the “shutdown”. However, back in December, Polo Field’s Twitter account was beginning to show some signs of life again, which I posted about.

Since then things have gotten even better. While he does not tweet daily by any means, Polo Field at leasts tweets a few times a week now. Not only that, but his Twitter account is no longer set to private! 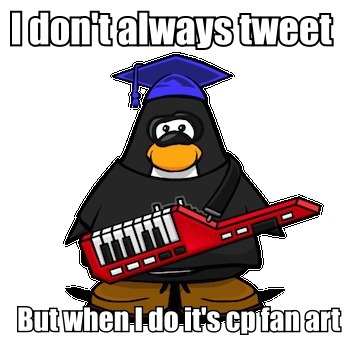 Initially it was only Polo Field who was tweeting again. But then out of the blue last week Megg broke the silence on her Twitter account with a tweet of Club Penguin fan art – her first tweet in just under six months.

Great #CPFanArt! I really like how it shows just how big the island really is. pic.twitter.com/MX8ngStsGO

Seriously, how do you go from this:

1/3: It’s moving day! @ninjachat3, @daffodaily5 and I will be joining @polofield over at the @clubpenguin account.

Whether or not any of the other Club Penguin staff members who had their own Twitter accounts will return has yet to be seen. Stay tuned, I guess?