On the 21st of March there were two updates in 2008, an Easter Egg Hunt and a new furniture catalogue. In 2013 the Puffle Party began and the Puffle Hotel opened, meaning members could work on the tasks to adopt a Rainbow Puffle. There was also a new pin, the Rainbow Puffle Pin. PH was visiting too. She had a new background for players to collect. In 2014 a new task was available at the Muppets World Tour.

On the 21st of March in 2008 was the beginning of that year’s Easter Egg Hunt, Club Penguin’s third one. The prize for finding the eight eggs hidden around the island was the Green Bunny Ears. The second and only other update in 2008 was the furniture catalogue being updated for the month. It featured some new spring themed items as well as other miscellaneous igloo decorations. 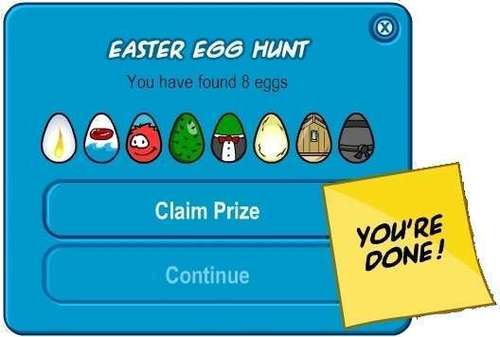 Moving ahead to 2013, all of the updates were puffle related. The 2013 Puffle Party began, and along with that came a lot of other puffle related updates. The Puffle Hotel opened, meaning members could begin completing tasks at the hotel so they could unlock the rainbow puffle. Initially players had to wait 18 hours between tasks, however a week into the party it was shrunken down to 6 hours. After that it’s a mere 20 minutes between tasks. At the Puffle Party there was a room decorated for each puffle colour and members could transform into puffles, too. There was a special catalogue of puffle-themed items members could buy and PH was waddling around for the party with a new giveaway background. 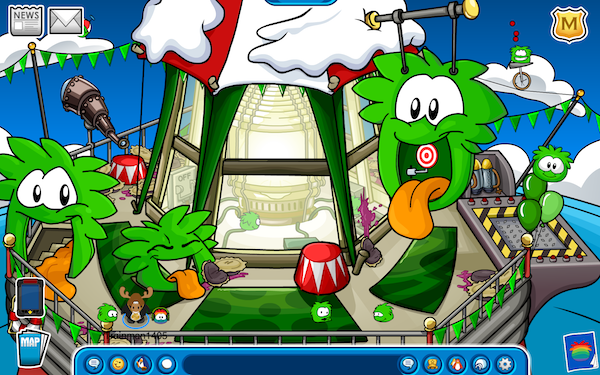 The final update in 2013 was a new pin, the Rainbow Puffle Pin. It was hidden at the Beach. It is Club Penguin’s 240th pin and was the sixth pin to be hidden in that room.

The only update in 2014 was a new task at the Muppets World Tour. You had to go to England (the Town) and meet Miss Piggy. You had to sing a duet with her.