On the 29th of January Club Penguin has only updated in 2010. That day there were three updates.
A new pin was released along with updated igloo music and new features in the Dance Club.

The Pin was the Speaker Pin. It was located in the Pet Shop on the Puffle House.This is Club Penguin’s 113th pin and was the fourth pin to be hidden at the Pet Shop. No pin has been hidden there since. The pin was a speaker to go along with Club Penguin’s new dance club renovations, which are detailed below. The other small update on this day was the new igloo music tracks. They were Puffle Party, Orca Straw, Float in the Clouds, and Planet Y.

On this day in 2010 the Dance Club room got a few cool news feature. When a certain amount of penguins were in the room, flashing lights and a disco ball would appear. Not only that, but the colour of the dance floor and disco ball lights would change based on what colour most penguins in the room were. Unfortunately this feature no longer exists due to Club Penguin’s room renovations. 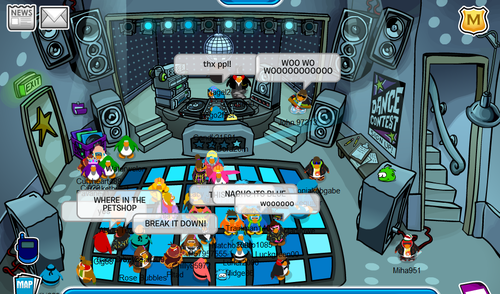