Starting with 2007, there were three different updates: a new pin, a new penguin style catalogue for that month, and flooding underground, which was foreshadowing that month’s party. The new pin was the Water Drop Pin. This pin was Club Penguin’s 36th pin and you could find it in the Dance Lounge. Moving on to the new Penguin Style,the main theme of the new items this catalogue were different summer activities such as scuba diving and rollerblading. Finally, as I mentioned above the underground was flooded: the crab you see in the Cave tapped the glass which caused it to crack enough that water seeped out and flooded the underground. In order to remove the water it was pumped out and spread out around the island for a water party. 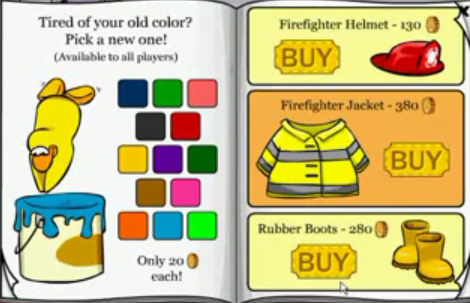 Moving ahead four years for 2011, there was a new pin and also a new penguin style. The new pin was the Tiki Mask and you could find it at the Dock. On the other hand the new penguin style featured new adventure items for that month’s Adventure Party.

Finally, the noteworthy event in 2012 was a ringtone for Cadence’s song “The Party Starts Now” was available on iTunes. Then in 2013 Team OK won the scare games at the Monster’s University Takeover.