Remember how last week Club Penguin said they were going to interview Jordan Fisher, said they needed help with their music video, then released the audio to their new song “It’s Your Birthday” sung by Jordan Fisher? Since then an interview and the full music video has been posted to the blog. Here’s both of them.

First up, here is his interview:

What are your favorite things about Club Penguin?
Personally…I love the social aspect of the game. The fact that it’s truly such a safe way for friends to meet up and play some games together after school is way cool.

How did you get to where you are?
To shorten a VERY long story…I fell in love with theatre first. It was something brand new and exciting to me growing up as a gymnast…that was all I knew. As much as I love the sport, I could quickly tell that I was more passionate about performing. Started acting, singing, and dancing simultaneously…met my eventual manager at a workshop in Birmingham, AL (my hometown)…started making trips back and forth between AL and LA auditioning for TV/Film…fell in love with TV/Film…eventually started working on TV/Film…eventually started writing and recording music…bada-bing bada-boom…I now reside in Los Angeles full-time as an actor/artist! Love it dearly. :)

What cool projects are you working on now?
Well, lately, music has been a huge part of my life. I’ve been in the studio heaps over the last year, writing and recording with some incredible producers.

My debut single “By Your Side” will actually be played for the first time on Radio Disney this Friday! Look out for it. ;)

We hear you’re going on a volunteer trip to Ecuador. Could you tell us more about it and how you got involved?
I sure am! I’m SO excited about it. We’ll be in Ecuador for eight days working with a beautiful community to help build classrooms, tend to farms, and workshop with artisan groups among many other things. Words can’t express how humbled and overjoyed I am to be a part of this experience. My flight couldn’t come any sooner!

1999bloo asks: What was your penguin name?
To be honest…I can’t remember my old Penguin’s name. Although, my NEW Penguin’s name is Soraxas! It’s a fusion of two characters from my all-time favorite game, Kingdom Hearts. :) Also…just a little trivia…my dog’s name is Sora as well! 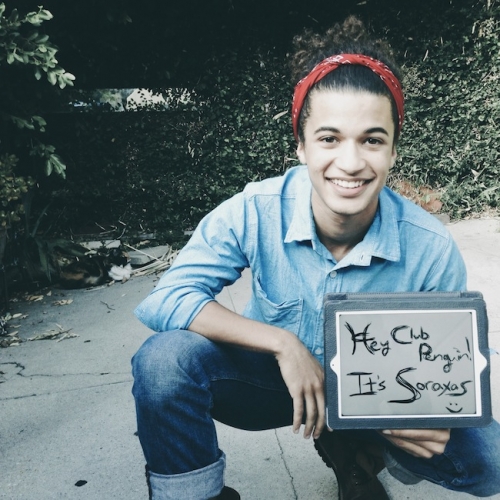 Srijanrocks2 asks: What was your first ever Club Penguin party?
The Christmas Party in 2005 was my very first party on Club Penguin! It’s my favorite Holiday of the year. I actually start listening to Christmas music on Nov. 1st every year to get amped up and in the spirit. :)

Lorenzo31178 asks: What was your favorite party on Club Penguin?
The Teen Beach Summer Jam was super cool to me for obvious reasons. The fact that I played Club Penguin close to the very beginning and then had costumes modeled after my character in “Teen Beach Movie” some years later is still wonderfully strange. Haha :)

Boba 126 asks: What was it like creating the birthday track for Club Penguin?
It was AWESOME! I got to meet a few kids that day that all play Club Penguin as well. Had a blast!

Tech70 asks: What is your favorite Club Penguin mascot?
SENSEI. My friends and I played this ninja game that we made up pretty frequently. Being the smallest and youngest of my friends at the time, we all thought it would be funny to make me the “ninja master”, so I would always walk around with my hands behind my back or with a cool walking stick that I would find calling everyone “grasshopper”…so when I met Sensei in CP for the first time when he was digging out the Dojo, I flipped out!

Ds Fan13 asks: If you could become one of the main Club Penguin characters, who would it be and why?
Jet Pack Guy for a few reasons..
A) He has a jetpack.
B) He ALWAYS has his jetpack (and shades, of course).
C) He seems like a pretty cool guy, but can also take care of business when he needs to.
D) My mode of transportation is my car…his is…A JETPACK!!!

Here’s the music video for It’s Your Birthday. Yes, you can see my penguin at 48 seconds in. :)