Is this one takeover too many? Since the dawn of the takeover parties last year they have always been two sided. There’s the penguins that are excited for the party and then the penguins that complain about the takeovers and dislike it. It seems like a very large amount of penguins are leaning towards disliking the upcoming Star Wars party! Looking at the Star Wars Takeover trailer video yesterday I noticed it had a rather large amount of dislikes compared to all the other Club Penguin videos. There were 760 likes and a rather large amount of 386 dislikes. Not only that, but both top comments were against it! 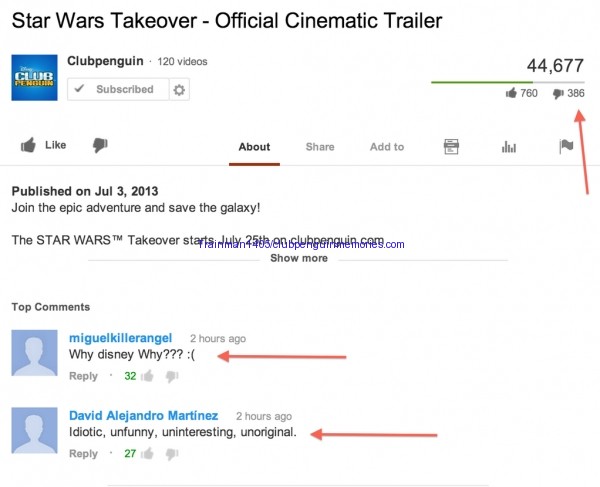 Let’s fast forward to today. The dislikes nearly doubled and the likes went up just over 200. As of writing this post the cinematic trailer sits at 963 likes and 650 dislikes. I doubt things are going to turn around anytime soon.

It was also pointed out to me by Danel5 on Twitter that the top comments appeared to be deleted. I really doubt both comment writers deleted their own comments…it appears Disney deleted them. I loaded every comment on a page and searched for them but it yielded no results.

So yeah, by the looks of it they’re attempting to cover up the negativity. I don’t want to make any false accusations though, so keep in mind I suppose it might be possible (although I doubt it) that the two YouTube users just happened to delete their own comment.

Plus, in eighteen hours the comment from Polo Field saying “Thumbs up if you’re excited about the Star Wars Takeover!” got no thumbs up…

While you shouldn’t necessarily judge a book by its cover or a party by its trailer, I believe it’s a bit different this time. I think it’s just one takeover too many and Club Penguin needs to rethink their Disney tie-ins, either not doing them at all, doing them very infrequently, or spacing them out throughout the year rather than several in a row like Spike Hike suggested in the comments on this post I recently made. Either way, the message from the Club Penguin Community is loud and clear. While many are happy about the upcoming Star Wars Takeover, even more are unhappy about it.

154 thoughts on “Is It Going To Be a Flop? Star Wars Takeover Trailer Gets Many Dislikes and Club Penguin Deletes Negative Top Comments”