While I am not Portuguese nor do I speak Portuguese, Club Penguin Memories does receive a fair amount of visitors from Brazil and Portugal, so I might as well share the information even though several Portuguese specific Club Penguin Cheats websites have already done so.

Anywho, it was brought to my attention by Marlon58670 that the second issue of the Portuguese localisation of the Club Penguin magazine was originally supposed to come out on August 9th, but was delayed until this Thursday, August 30th. 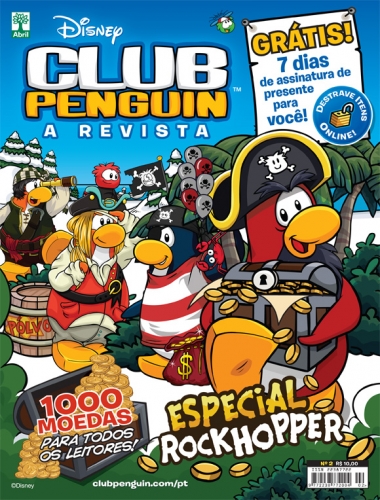 If you compare it to the European Club Penguin Magazine Issue 2 you’ll see that it is almost the exact same thing, just in Portuguese and contains some other minor changes. Basically, the Portuguese version is almost identical to the English version but is six issues behind. (since the 8th issue just recently came out in the United Kingdom)

@Trainman1405 Probably on Thursday. There was a delay on publishing, the magazine should been released on August 9th.

Here is a front cover translation from Oarca