Today Club Penguin has released their second issue of the official Club Penguin magazine. Here’s everything in this month’s issue – I’d like to thank Bloxxerman for all of the information and pictures as they do not sell it where I live. 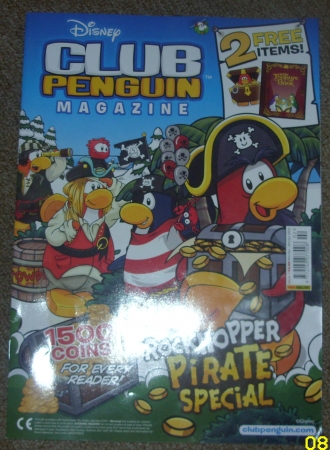 This month it is a special Rockhopper pirate themed issue. You get a code to unlock the Treasure Chest Costume, which I previously posted about here. You also get one item of your choice from the treasure book, 1,500 coins, and Puffle Poppers. There’s also a sneak peek of the April Fools Day Party. It reads:

There’s somethin funny going on at Club Penguin this April! Anything can happen at our annual April Fool’s Party… and it usually does. See you there!

Now, here is the table of contents for everything included in this issue:

As for the next issue, here is what it says about it:

Shhh! Next issue is our top secret Spy Special! 2 FREE ITEMS! One item of your choice from the Treasure Book and a Spy Tuxedo! Rookie stars in our comic story! Gary’s 10 greatest gadgets! The Golden Puffle! All new missions! Secret Agent Quiz! Plus FREE wrist-mounted disc launcher (with 10 puffle discs) and 1500 coins! Out 5th April!

This is the Spy Tuxedo: 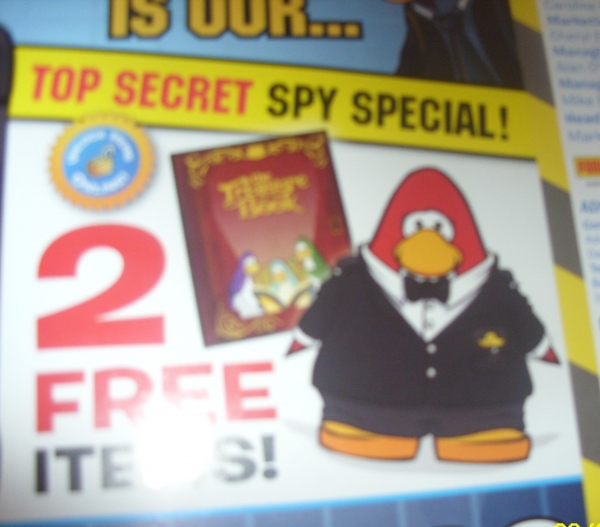