Whenever I find out Club Penguin has a commercial airing on television and they haven’t uploaded it to the internet yet, I record it onto my computer – I have a wonderful gadget where I can record and watch live TV right on my computer. I did it with last year’s Get Connected Puffle Commercial (although I missed the first 20 seconds and later that day Club Penguin uploaded it to YouTube) and I did it with the Good Morning America broadcast back in December. Then last Sunday I found out they had a new commercial on Disney Channel, and I posted about it (with pictures) here. Throughout this week I tried my best to record whatever shows I could on Disney Channel to see if I could get the commercial, but when sifting through the commercials I did not see this new Get Connected. However, today I managed to find it, and here is the full official video of the Puffle Party 2012 Get Connected Video on Disney Channel! I did watermark it in the bottom left corner with my penguin name just to make sure nobody copies it and claims it as their own. I’m sure Club Penguin will upload their own HD unwatermarked version to YouTube soon enough, but

in the meantime, here is my recording of it:

To recap everything, the video stars with Brantley and Graysan, who are the reporters for this Disney Get Connected commercial. They’re at the Club Penguin office.

They meet up with Adam, who is hard at work putting the finishing touches on some Puffles.

Here’s some of these Puffles, with unreleased hats! Do you think we’ll end up seeing them in time sometime soon? I like the clown wig one.

Here’s the right side of the Cove:

Left side of the Cove:

Close up: (this is where Happy77’s sneak peek image for Saraapril was taken) 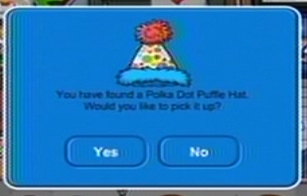 Here is the Ski Village:

The free Mini Polka Dot Puffle Hat, which I posted about (as well as other unreleased Puffle Hats) here

I wonder what the book icon in the lower right corner is for? 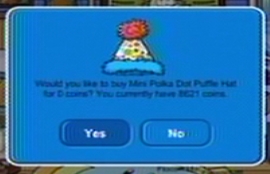 Here is the members room, the Puffle Play Zone, complete with the spa and more! I believe this will be the only room you can be a Puffle. I very easily could be wrong.

Final picture of the room:

Finally, here is the Plaza.

The Puffle Party starts March 15th. Be sure to check it out!