There has been many updates on the 29th of May. Updates have occurred in 2008, 2009, 2014, and 2015. In 2008 winners for the book contest were announced, in 2009 there was a new sports catalogue, plants were placed at the Beach by Rockhopper, a new login screen was added, new igloo music was added, and the background for igloos was updated. In 2014 a new pin was hidden and new items were available at the Future Party. Finally, in 2015, a new item was available at the Fair.

On this day in 2008 the winners for that year’s Book Room Writing Contest were announced in the Club Penguin Times, specifically issue number 137. Players were able to submit their own short stories to Club Penguin for a chance for it to be published in-game. Three penguins, Lolliepops10, Sammysays, and Chochypop, had their stories selected. They were published in a book in the Book Room the following day. 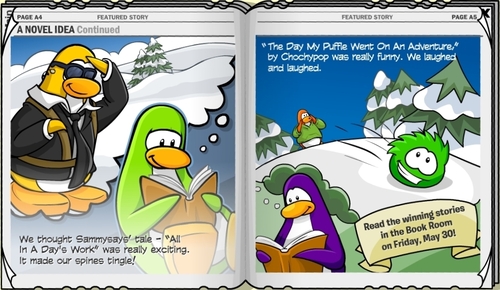 Jumping ahead one year to 2009, the main update on this day that year was a new sports catalogue. It contained soccer items (football for some) is well as scuba diving and hiking gear.

Another update on this day in 2009 took place at the Beach. Plants and trees of all sorts were unloaded at the Beach by Rockhopper, as he brought many crates of them to Club Penguin and he had just arrived at the island. A login screen saying “Explorers wanted June 12 – 16”, was added, which was related to the plants Rockhopper brought. 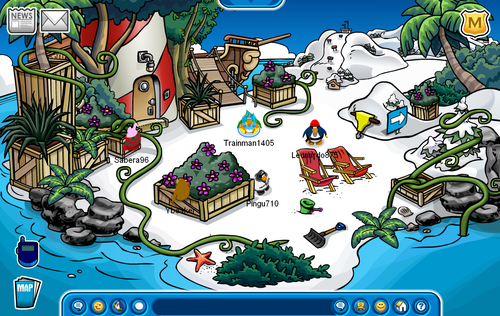 The final two updates on this day in 2009 were igloo related. Seven new igloo tracks were added. They were Flipper Stomper, Coconut, Catchin’ Waves Theme, Puffle Ragtime, Summer Song, Mix Maestro, and Water Kongo. The other igloo related update was Club Penguin changing the background for igloos. Back then all igloos had a set igloo background of the forest that could not be changed to other locations, something you can do now.

The next year with updates on the 29th of May is 2014. At the Future Party Protobot was attacking Club Penguin, so you had to defeat him. As a reward for beating him you could get the Protobot Helmet, and, if you were a member, also the Protobot Costume. The other update on this day in 2014 was a new pin being hidden on the island. The Space Academy Crest Pin could be found at the Dance Lounge. It was the ninth pin to be hidden in that room and the 278th pin overall.

The final year with updates on the 29th of May is 2015. The Handyman head item was now available at the Fair. It could be collected by all players for 100 tickets.