On the 2nd of April Club Penguin has only updated in 2015. A new pin was hidden on the island, the featured postcards selection was updated, version 1.2 of Club Penguin’s Sled Racer app was released, and the Earth Month page was updated with a code to unlock the Monkey Costume.

The pin hidden on this day in 2015 was the Fishing Rod Pin. This pin is Club Penguin’s 307th pin overall and is the tenth pin to have been hidden at the Hidden Lake. 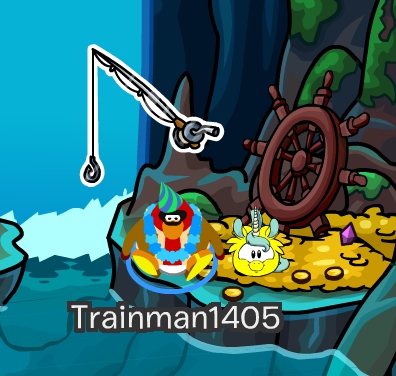 Out of game, Club Penguin released version 1.2 of their now defunct Sled Racer mobile application. The update contained a leaderboard, the ability to obtain the Golden Goggles, and more.

Finally, Club Penguin updated their Earth Month page on their website. For every Monkey Costume unlocked with the code MONKEY4U Club Penguin would donate $1 USD to improve monkey habitats, up to $50,000.