On the 9th of October Club Penguin has updated in 2009 and 2014. In 2009 a new pin was hidden, the stage play changed, the sky around the Dojo turned a dark gray, a new login screen was released, and the featured postcards were updated. In 2014 there was a new furniture & igloo catalogue as well as new igloo music.

The pin released in 2009 was the Football Pin. The Football Pin was located at the Lodge Attic in the bottom left corner. This pin is the sixth pin to be hidden in that room and is Club Penguin’s 103rd pin overall.

Squidzoid vs. Shadow Guy and Gamma Gal returned to the Stage for a fourth time on this day in 2009, too. Also, to get ready for Card-Jitsu Fire, a few weeks after the sky was red/orange the sky around the Dojo turned a dark grey colour. 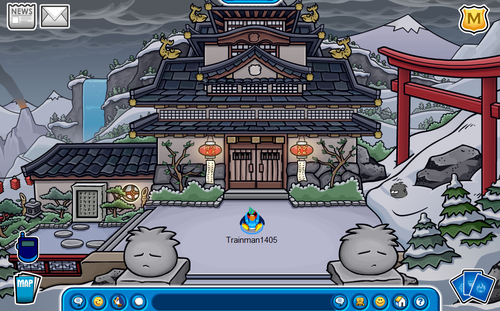 That’s all the big updates in 2009. A couple minor ones occurred, too. There was a new login screen advertising the Halloween Party and new clothing items. The postcard catalogue was also updated. The featured postcards now listed the Happy Birthday, Costume Try-Outs, Happy Halloween, Trick or Treat, and Squidzoid postcards.

In 2014 both updates were igloo related. A new furniture & igloo catalogue was released and it contained the brand new Ghostly Cavern Igloo that could be purchased for 1,800 coins if you were a member. The updated catalogue also contained new furniture items such as the Magic Crystal Ball, Spooky Hearth, and Jack-O-Lantern Curtains. 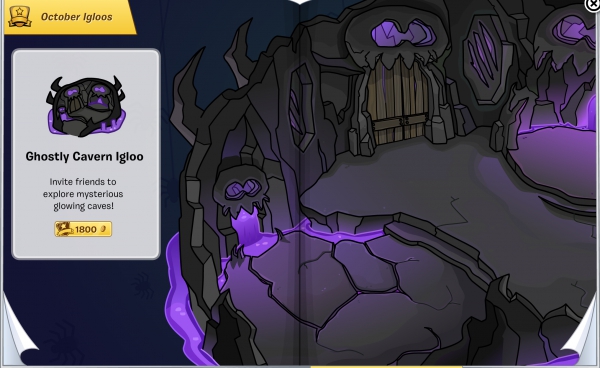 The new igloo music tracks were also Halloween themed. Members could play tracks such as Spooky Jazz, Seek and Hide, and Phantasmagoria in their igloos.