On the 25th of October Club Penguin has updated in 2012 and 2014. In 2012 there was a new login screen with Herbert, Herbert’s website was updated, and the 105th field op mission was released. In 2014 floors 8 and 9 at the Puffle Hotel were now available for the Halloween Party.

Two of the three updates in 2012 were related to Herbert. A new login screen was released with him saying the island is doomed. The second update relating to Herbert was on his website, ClubHerbert.com. It had his list of people to capture – G, Dot, Rookie, Jet Pack Guy, and The Director. The website also showed a target on the Everyday Phoning Facility. 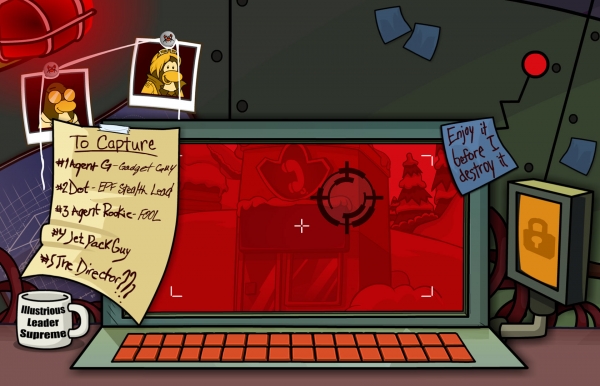 The other update in 2012 was the release of the 105th field op mission. You had to go to the Mansion Attic, a special room at the Halloween Party. The mini-game was to repair the system which was done by entering directions for the repair bot to follow.

In 2014 floors 8 and 9 were now accessible at the Haunted Puffle Hotel, meaning you could now continue solving the mystery about the haunting. The clue for floor 8 was “The haunted pumpkins hide the key, look inside them and you’ll soon see!”. Floor 8 was the hotel’s pool and you had to click on all of the pumpkins in the room to smash them and then the key, which was really a part of the ghost catching machine, would reveal itself. The next floor, floor 9, was the library. Floor 9’s riddle was “Through a maze you have to look, and not simply for a book!”. All you had to do was waddle through th emaze, step on the red, tile, and then it would turn green and reveal another part of the ghost catching machine. More ghost luggage for players, the Magic Hat for all players and the Ghost Puffle Costume for members, could then be obtained. 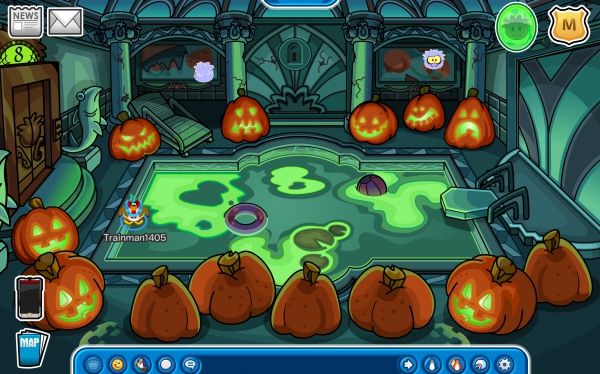