The first of the two updates in 2008 was a new pin, the Magnifying Glass Pin. This is Club Penguin’s 70th pin. It was located at the Dock on the right side of the room. This is the fourth pin to be hidden at the Dock.

The other update in 2008 was Ruby and the Ruby being released at the Stage for the first time. The 71st Club Penguin Pin, the Ruby Pin, was located in the safe behind the painting hung on the wall of the play’s set. Since the first showing of this play it remained unchanged aside from minor script changes and a different pin in the safe.

2013 had over quadruple the amount of updates 2008 did. Before this day in 2013 furniture and igloo catalogues were separate, however now the Club Penguin Team joined them into one, calling it the Furniture & Igloo Catalogue. The new furniture items were medieval related to go along with that month’s Medieval Party. 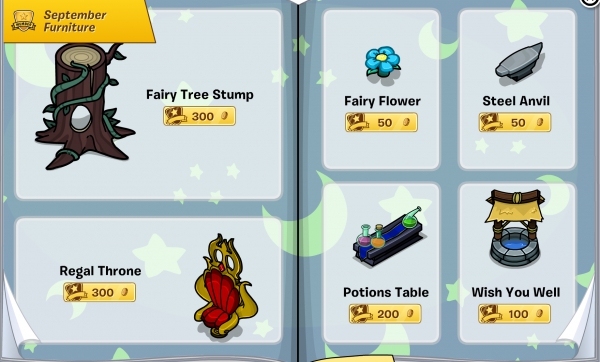 Speaking of medieval, some decoration creates were placed around the island to prepare for that month’s party. Also, Fairy Fables returned to the Stage for a 17th time. The other big update was that Rockhopper arrived. As a bonus, had a new look on his playercard.

Minor updates in 2013 include the username glow being added to your player (previously it was just black text), the igloo music receiving an update, and finally when wear items that do a special dance the button would now light up in green to notify you about that.