On the 22nd of July Club Penguin has updated in 2011 and 2014. In 2011 the team added a login screen, that year’s Island Adventure Party began, Rockhopper arrived for another visit, and the featured postcards selection was updated. In 2014 more items were available at the Music Jam.

The new login screen released this day in 2011 advertised the Island Adventure Party. It said “Search for the missing cream soda! July 22 – 31”. At the Island Adventure Party you could take place in a cream soda scavenger hunt, earning different pins along the way. The pins were the Eye Patch Pin, Telescope Pin, Tropical Feather Pin, and the Old Key Pin. Once you finished the scavenger hunt you were able to dig up the Continental Hat head item at the Cove, where ‘X’ marked the spot. 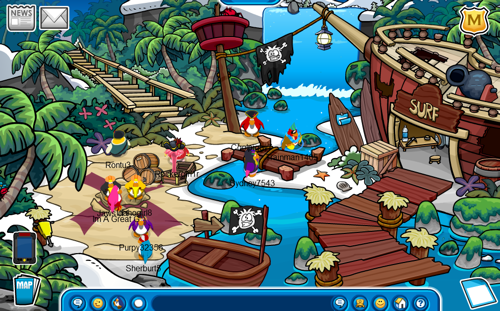 At the party member players could purchase the Blue Crab costume for 50 coins at the Hidden Lake. They could also play a mini game and earn the Commander Coat, a body item. Also at this party the Music Maestro stamp was released, which is unlocked by solving a musical puzzle at a party.

The third of four updates in 2011 was Rockhopper visiting the Club Penguin island again. His free item for all players was the Puffle Bandana. The clothing items members could buy were the Scallywag Rags for 325 coins, The Rascal for 200 coins, and the Castaway Face Paint for 50 coins. Members could also purchase the Wall Map for 250 coins a piece and Tropical Palm for 300 coins a pop. Those two items are furniture items. There was a third furniture item available in the catalogue too, albeit hidden. The Ship in a Bottle, the hidden furniture item, cost 355 coins each. 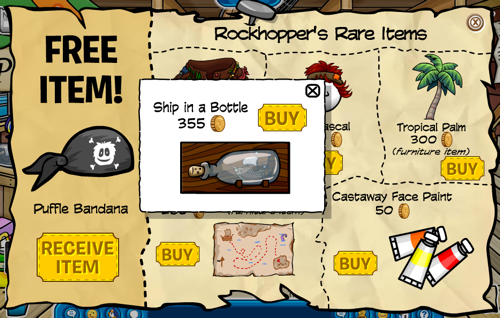