Back in 2006 Club Penguin didn’t have nearly as many rooms as it does now. There was no Puffle Berry Mall, no Dojo, no Puffle Hotel, no Forest, Cove, etc. There was no Beach, either, until June 16th when it was released to the public. However, back then you couldn’t enter the Lighthouse. There was a sign on the door saying it would be opening in the Fall.

As for the Summer Party, compared to how parties are now, it was decorated very simply: some random summer-themed items placed around the island, such as a pool at the Ski Village and palm trees at the Town. The free items at the 2006 Summer Party were the Orange Floaties, Yellow Duck, Whistle, and Blue Lei, which is one of my favourite items. 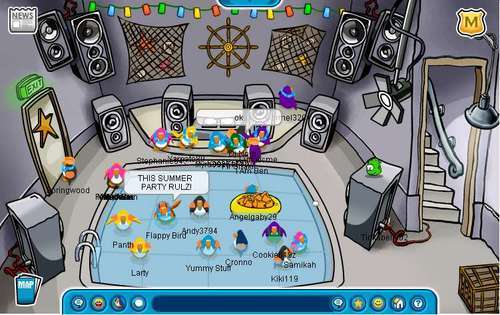 On this day in 2011 Club Penguin updated the Beta Team. Rollerscape was removed and Photo Puzzle and Pizza Oven were added.