There were several updates on the 12th of February in 2010 and in 2013 Club Penguin’s EP “The Party Starts Now” was released.A majority of the updates in 2010 were puffle related. To prepare for the 2010 Puffle Party, boxes were placed around the island. There were also three new login screens, with two of the three advertising the Puffle Party. The third new login screen advertised the stage play that was released that day, Secrets of the Bamboo Forest. To go along with the play the Golden Feather Pin was hidden at the Lighthouse Beacon. The pin was needed to cross the small bridge at the Stage so you could collect the Phoenix Queen’s Background.

The other updates in 2010 included the Orange Puffle being spotted at the Ski Lodge, taking place of Fred in the cuckoo clock every 30 minutes, the Puffle Furniture catalogue was updated, and the postcards were updated. 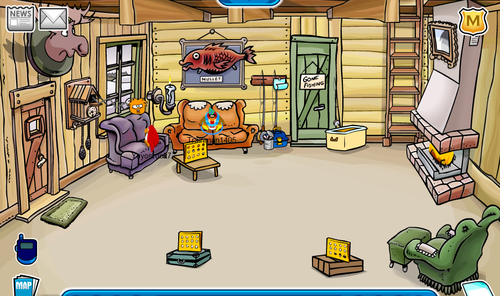 In 2013 Club Penguin’s album “The Party Starts Now” was now for sale in stores and on iTunes. It featured six songs: The Party Starts Now, Anchors Aweigh, Ghosts Just Wanna Dance, Cool In the Cold, Puffle Party (Gotta Have a Wingman), and Dubstep Puffle. If you purchased the CD you could get the Bling Bling Necklace item added to your penguin account.