On the 13th of December there have only been updates in 2012. That year there were new furniture and igloo catalogues, a new pin, an igloo contest, the igloo music was updated, Rockhopper was closer in the telescope, and a new issue of Club Penguin’s magazine was now for sale in the UK.

The furniture catalogue featured new items for the holidays such as the Tinker Train Engine and Tinker Train Car. Items such as the Holiday Lights and Presents made a comeback. The igloo catalogue brought back the Snowy Backyard Igloo and Snow Globe Igloo and also released the Fresh Baked Gingerbread House Igloo for the first time ever. Along with the igloo catalogues Club Penguin also updated their igloo music with new holiday tracks and launched the Holly Jolly Igloo Contest, an igloo decorating contest where members could decorate their igloo to their liking, submit it, have it reviewed, and if they won they would get coins added to their account and the winning igloo would be featured in an issue of the Club Penguin Times. Unfortunately Club Penguin seems to be done having igloo decorating contests nowadays. :( 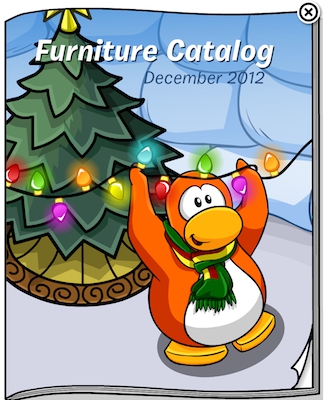 Aside from the igloo related updates there were also a few other updates. The Snowflake Pin was released at the Cave Mine, nowadays known as the Gold Mine. It was the 5th pin to be hidden at the Cave Mine/Gold Mine and the 232nd pin overall. This was Club Penguin’s first pin you could obtain by clicking on it rather than waddling over it.

The final update in 2012 happened in real life. The 12th issue of Club Penguin’s magazine was released in shops in the United Kingdom. It was a holiday special and came with codes to unlock the Fish Dog Vendor Cap, Fish Dog Vendor Pouch, and an item of the user’s choice from the treasure book.