So this is what Polo Field was referring to on Club Penguin two weeks ago when he said there was going to be a new music video! To celebrate the worldwide launch of Puffle Wild, Club Penguin has released a music video with a new song called Awesome to be Rare, performed by Glitterpants the Unicorn Puffle. Along with the new YouTube video Polo Field also made his first actual tweet in two months…to promote Puffle Wild. Here’s the music video:

Here’s Polo Field’s tweet. It contains the hashtag #PuffleWild, a link to download the app from the app store, and a meme image saying “I don’t always tweet, but when I do it’s because there’s a new app”. 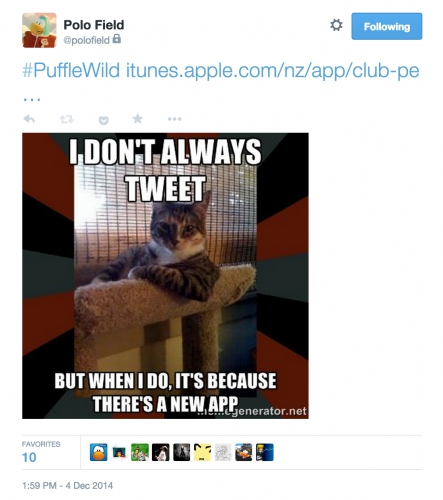 I wish he’d tweet more. Megg and Ninja too.

Leave a Reply to I've Got No Name Cancel reply