Polo Field was on his alternate penguin “Polo” earlier today, and while chatting with some friends he dropped a few hints on what’s to come to Club Penguin between now and the end of the year. Rockhopper’s ship The Migrator was destroyed by crabs, so once again it will have to be rebuilt. Only this time around the ship won’t be getting the same identical design. Here’s what Polo said. Picture courtesy of 1999bloo. 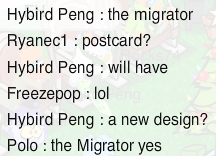 I wonder what the new design will be like?

On the other hand, Club Penguin is also working on a new music video! I wonder what song the music video is for? Maybe a new one? As I’m writing this post an idea just popped into my head. Maybe the We Wish You a Merry Walrus special coming to Disney Channel will have a new song in it? Along with a new music video coming out next month there will be a remix too. What song do you think will be remixed? Cool in the Cold, maybe? Picture courtesy of PenguinBlonde. 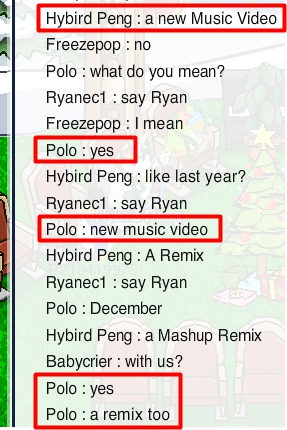