Apparently a Christmas special is coming to Disney Channel UK next month. Titled “We Wish You a Merry Walrus”, the claymation(?) holiday special features a pirate named Roofhowse who lands on the Club Penguin Island and finds himself become part of an unexpected festive adventure. 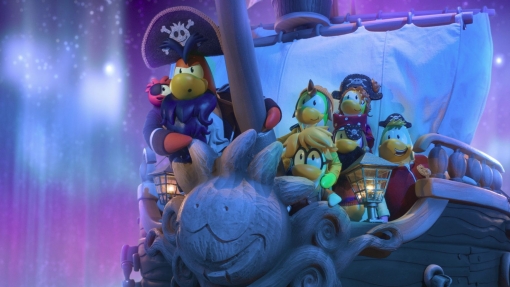 The special will premiere on Disney Channel UK at 6:30 PM (GMT, of course) on Wednesday, December 17th. It was not said how long this animated short is. A few minutes, fifteen minutes, maaaaaybe a half hour?

Air dates in other countries is currently unknown however the news article does mention it will also be translated to Spanish, Portuguese, French, German, and Dutch.

Assuming this is real, in which case it will be, I’ll keep you guys and gals posted with any other news that comes of this. Based on the teaser image it looks cool and I can’t wait to check it out! But…why Roofhowse and not Rockhopper?